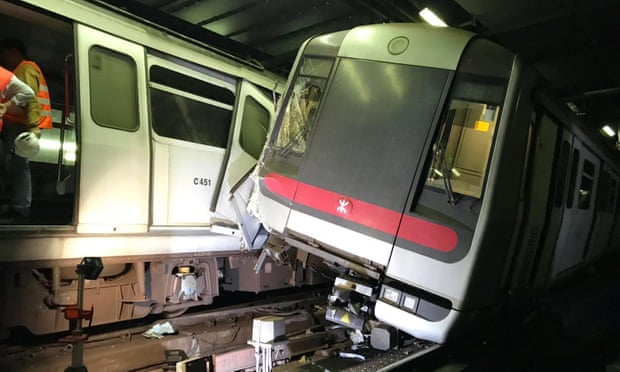 A train collision in Hong Kong has threatened commuter chaos during the rush hour, authorities have said.

The rare disruption on a network used by nearly 6 million people every weekday brought services to a halt on Monday between the stations of Central and Admiralty, the rail operator MTR Corporation said.

“The repair will take quite a long time and the service between Central and Admiralty … will not be available for the whole day,” said MTR’s operations director, Lau Tin-shing.

An investigation into the incident has begun, although the trains carried no passengers at the time of the collision, during a trial run of a new signal system.

The drivers of both trains were taken to hospital, the network operator added, urging commuters to use other forms of travel or different rail routes.

MTR’s shares fell more than 1% in early trading, lagging a gain of 0.3% in the benchmark index.