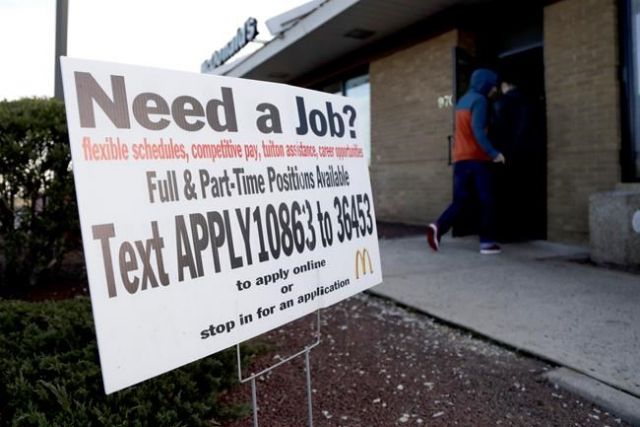 U.S. businesses added a solid 183,000 jobs in February, a private survey found, a sign that companies are continuing to hire even as economic growth is likely slowing.

Payroll processor ADP said Wednesday that last month’s job gains were down from the 300,000 added in January, a figure that was revised up sharply from 213,000. It was also below last year’s average monthly gain of about 235,000.

Hiring occurred across all major industries tracked by ADP, including professional and business services, which includes high-paying fields such as accounting and engineering, and which gained 49,000 jobs. Education and health care added 37,000. Construction gained 25,000 jobs and manufacturing 17,000.

Mark Zandi, chief economist at Moody’s Analytics, a forecasting firm that compiles the ADP data, said that hiring slowed a bit because the economy is cooling. Still, he expects companies to keep adding jobs because growth will likely recover from the first-quarter slowdown.

“The economy has throttled back and so too has job growth,” Zandi said. But, he added, “I don’t expect businesses will turn off hiring.”

The ADP covers only private businesses and often diverges from official figures, which also include government hiring. The government is scheduled to release its employment report Friday, which analysts forecast will also show a gain of 183,000 jobs, according to data provider FactSet. The unemployment rate is expected to drop to 3.9 per cent, from 4 per cent.

Employers ramped up hiring last year to its fastest pace in three years, as growth also picked up in the wake of the Trump administration’s tax cuts and increased government spending approved by Congress last spring.

Yet the administration’s trade fight with China, a weaker global economy and the waning of the tax cut’s impact have slowed growth in recent months. Economists forecast the economy will expand at roughly a 1 per cent annual rate in the first three months of this year, down from 2.6 per cent in the fourth quarter.

Crypto rally adds $7 billion to total value of all coins