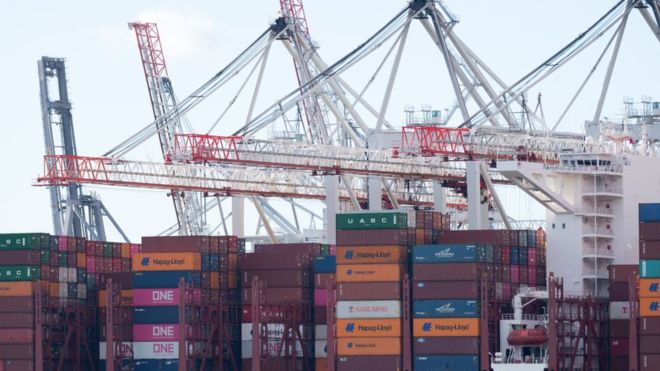 The UK government may cut trade tariffs on between 80% and 90% of goods in the event of a no-deal Brexit, reports say.

Some tariffs would be scrapped completely, including those on car parts, and some agricultural produce.

However, 10-20% of key products would continue to be protected by the current level of tariffs, including some textiles, cars, beef, lamb and dairy.

The government said it would make an announcement once a decision had been finalised.

Tariffs are taxes on imports which protect UK companies from overseas competition.

Many supporters of Brexit argue that tariffs on food and other items should be scrapped in order to lower prices for consumers.

But farmers fear that cheap imports and lower standards would destroy many parts of British agriculture. Similar concerns have been expressed in other sectors of the economy, and many business leaders fear the government could be tempted to cut tariffs at their expense.

Business Secretary Greg Clark told BBC Radio 4’s Today programme that new tariff schedules would be published only after next week’s Commons vote on Prime Minister Theresa May’s Brexit deal if it became clear the UK would be leaving the EU without a deal.

The changes would have “big implications” for some sectors, he said.

“We have been consulting with different industry sectors on this. It has big implications for different sectors. Ceramics is an industry that I know very well. It has been subject to very unfair competition, to dumping of very cheap ceramic exports from the Far East, from China.”

The Department for International Trade said that no final decision had been taken on tariffs, but there had been discussion across government about the right level in the even of a no-deal.

“If we leave the European Union without an agreement, our tariffs will need to strike a balance between protecting consumers and businesses from possible price rises and avoiding the exposure of sensitive industries to competition.”

Appearing before the International Trade Select Committee on 6 February, Liam Fox said he was carefully considering all the options for tariffs in the event of no deal.

“Unilateral liberalisation [reducing tariffs to zero] is not what I would propose, and I have not heard anyone else in government propose it,” he said.

“Throughout, there needs to be a balance between the impact on consumers and the impact on producers. The government are very clear that they need to give protection where necessary, but without becoming protectionist.”

And last month, Environment Secretary Michael Gove promised farmers that the government would apply tariffs to food imports in the event of a no-deal Brexit, to provide “specific and robust protections” for farmers.

“Your concerns have absolutely been heard,” Mr Gove told a conference of the National Farmers’ Union (NFU). “It will not be the case that we will have zero-rate tariffs on food products.

“There will be protections for sensitive sections of agriculture and food production.”

Tariffs perform two functions: to protect businesses from competition from abroad – and to raise money for governments.

However, these charges also spell higher prices for consumers.

By cutting tariffs on the majority of imports, the government would be giving consumers a helping hand.

While areas such as farming would benefit from the protection of tariffs, dropping them elsewhere would leave other UK businesses disadvantaged relative to their European competitors.

That may weigh on politicians’ minds, as the Prime Minister tries to rustle up last minute support for her deal.

In global terms, cutting the majority of tariffs would be a hugely bold move: it would send out the message that the UK is freeing up trade and is open for business