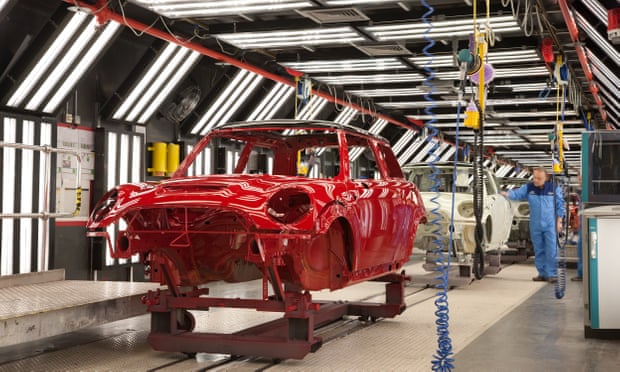 Carmakers employing thousands of people have issued stark warnings of an exodus from the UK in the event of a no-deal Brexit, in the clearest signal yet of the panic spreading through the industry.

With 24 days left until Britain’s scheduled departure from the EU, some of the automotive industry’s most senior figures offered a bleak assessment of the dangers facing a sector on which more than 850,000 people rely for their livelihoods.

Speaking at the opening of the Geneva motor show, BMW said it might be forced to stop making the Mini at its Cowley plant near Oxford, putting more than 4,500 jobs and more than 100 years of carmaking at the site at risk.

The German carmaker was swiftly joined by Toyota, Bentley and France’s PSA, which owns Vauxhall, in sounding the alarm about an uncontrolled exit from the EU, adding to the darkening clouds over the UK automotive sector.

Nissan later refused to deny a Sky News report that it will scale back production at its Sunderland facility, saying it did not comment on “rumours and speculation”. Last month, the Japanese carmaker said Brexit was disrupting plans for its UK business, after cancelling production of its new X-Trail SUV.

A spokesperson for the Department for Business, Energy and Industrial Strategy said: “The government’s top priority is to secure a deal with the EU, and to maintain the conditions for further jobs and growth in our world-leading automotive sector.”

The BMW board member Peter Schwarzenbauer, who oversees the Mini and Rolls-Royce brands, kicked off the flurry of warnings at Europe’s leading motor show, saying the Mini’s future in the UK was at stake.

“This [no-deal Brexit] would be really a huge burden for the Mini brand. If this would come, which is the worst-case scenario, we’d need to consider what it means for us in the long run. For Mini, this is really a danger,” he said.

Asked if this could mean BMW moving out of Cowley, he told Sky News: “We at least have to consider it because we cannot absorb 10% costs on top of it.”

Cars have been made at Cowley since the Bullnose Morris in 1913. The plant produced 234,501 Minis last year, sourcing 60% of its parts from Europe.

Schwarzenbauer also said the company, which employs 8,000 people in the UK, was considering whether to move production of BMW engines from Hams Hall in Warwickshire to Austria.

Also speaking in Geneva, Johan van Zyl, the chief executive of Toyota Motor Europe, said he could not promise British employees’ jobs were safe until the outcome of Brexit was decided.

Toyota has two major manufacturing plants in the UK, with about 2,600 workers in Burnaston, Derbyshire, making the Corolla and 600 employees making engines at Deeside.

“If it’s a bad Brexit, of course it will become very difficult,” Van Zyl said. “It will have a negative impact on competitiveness.

Maxime Picat, the operational director for Europe at PSA, which owns two Vauxhall plants in the UK, suggested the imposition of tariffs would threaten the UK’s efforts to become a world leader in battery technology, as carmakers move from the internal combustion engine to electric vehicles.

“If the UK market is closed to the European one, it’s a bit hard for me to understand how production of such batteries can benefit only for UK needs,” he said.

“Keeping a coordinated continental European automotive industry as it is today is the best chance for the UK. Today I cannot say there will be no plant closure … We will try and find any solution to avoid it.”

Adrian Hallmark, the chief executive of Bentley, which is owned by Volkswagen, said trade tariffs could either lead to job losses in an effort to cut costs, or prevent Bentley from increasing the size of its workforce.

“Brexit is not good news if there’s no deal. It does hurt us, but it doesn’t kill us,” he said. “We don’t plans to cut jobs, but if we lost volume then we wouldn’t need all the people that we currently have.”

Bentley has increased its reserve supply of parts from two days to seven to cope with potential Brexit-related disruption. It has also tested new supply routes to avoid expected congestion at Dover. The carmaker said the cost of these preparations was less than £10m.

Jaguar Land Rover, Honda and Ford have already issued warnings about the potential impact of a no-deal Brexit.

“With only 24 days to go until exit day, the car industry still doesn’t know what the impact will be on their supply chains and their ability to manufacture in the UK.”

Sharon Hodgson, whose Washington and Sunderland West constituency contains Nissan’s plant, said reports that it might scale back production were “hugely worrying”.

She said she had raised Nissan’s challenges with the business secretary and the prime minister, but had “received no assurances from them”.

“I think it is inevitable that Brexit will have a greater impact in the months ahead,” Willie Walsh told investors in a statement attached to IAG’s annual report.

“It has been quite shocking to get so far in the political process without having any real clarity about the future. That can’t be positive for the economy.

“Whether you are for or against the UK leaving the EU, all the credible forecasts I’ve seen predict that Brexit will have a negative economic impact in the short to medium term that is likely to damage consumer confidence and act as a further drag on business investment.”