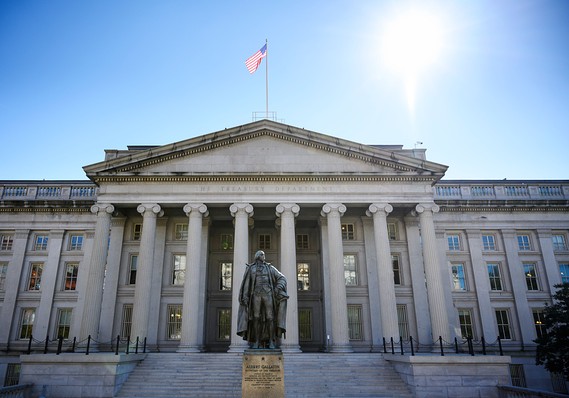 The numbers: For the month of January, the Treasury reported a budget surplus of $9 billion, down $41 billion or 82% from the same month a year ago.

The January figures came later than normal from the government due to the 35-day shutdown that ended Jan. 25.

What happened: Receipts in January dropped 6% overall, as individual withheld and payroll taxes fell by 8% and corporate taxes dropped 47%. Customs duties, meanwhile, doubled in the month.

Spending in January rose 6%, with outlays climbing 6% for Medicare, 26% for defense military programs and 9% for Medicaid. Interest on the public debt was flat for the month.

The Treasury noted that January 2019 had one less Monday and one more Thursday than January 2018, and that combination led to a lower level of withheld and payroll taxes. Adjusted for calendar quirks, the budget was balanced in January, compared to a $30 billion surplus in January 2018.

The big picture: For the fiscal year through January, the federal budget deficit is $310 billion, up 77% compared to the same period in the prior year.

The widening deficit comes as the Congressional Budget Office is projecting a shortfall of $897 billion for the full fiscal year, or 4.2% of gross domestic product. That’s up from $779 billion in fiscal 2018, when spending climbed and revenue remained nearly flat. The CBO sees trillion-dollar deficits beginning in fiscal 2022.