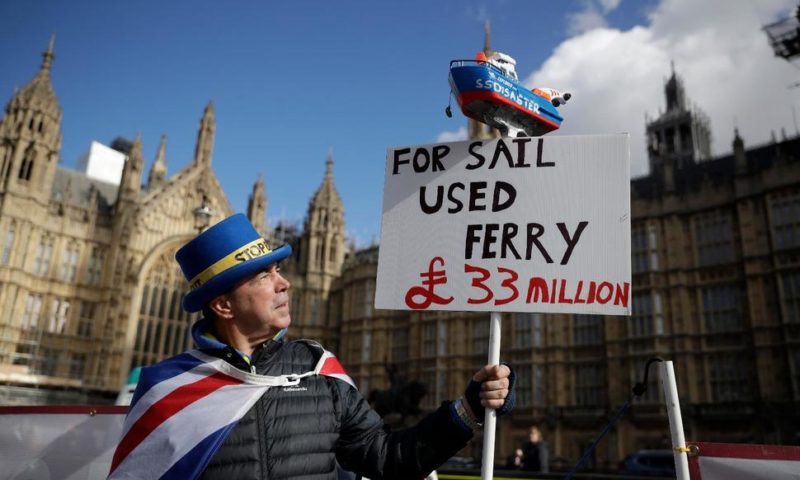 The head of Britain’s central bank says recent “constructive developments” will help limit the scale of any recession that would occur if Britain leaves the European Union without a withdrawal deal.

THE Latest on Brexit (all times local):

The head of Britain’s central bank says recent “constructive developments” will help limit the scale of any recession that would occur if Britain leaves the European Union without a withdrawal deal.

Bank of England Governor Mark Carney said border agreements, the rollover of some trade agreements and improvements in derivative markets mean the British economy won’t shrink by as much as the bank in November indicated was possible.

Addressing peers in the House of Lords on Tuesday, Carney said “there has been progress in preparedness, and that reduces the level of the economic shock.”

In the worst-case scenario from the fall, the Bank of England said the British economy could shrink by around 8 percent in the months after Brexit.

Carney says the recent developments mean the contraction may be 2 to 3.5 percent under that.

However, he says a disorderly Brexit would represent a “material economic shock” for the British economy.

Poland’s government has agreed to a backup plan in case Britain crashes out of the European Union without an agreement.

The government said in a statement after its weekly Cabinet meeting Tuesday that it agreed to a draft bill that will protect the approximately 6,000 British citizens living in Poland who will lose their status as EU citizens.

It said they will be given 21 months — that is until Dec. 31, 2020 — to submit an application for residency status in Poland.

Britain is due to leave the EU on March 29, but Parliament has rejected Prime Minister Theresa May’s deal, raising the prospect of a chaotic, economically damaging departure from the bloc.

The fate of hundreds of thousands of Poles who live in the U.K. is also at stake.

The Polish government is discussing a plan that would help prepare the country in the case of Britain leaving the European Union without an agreement.

Prime Minister Mateusz Morawiecki and his Cabinet are taking up the draft legislation during their regularly weekly meeting Tuesday.

Konrad Szymanski, a deputy foreign minister responsible for European issues, told the Polish news agency PAP that the plan should help alleviate the most acute consequences of a no-deal Brexit.

Britain is due to leave the EU on March 29, but Parliament has rejected May’s deal, raising the prospect of a chaotic, economically damaging departure from the bloc.

Hanging in the balance is also the fate of hundreds of thousands of Poles who have settled in the U.K. since Poland joined the EU in 2004.

The central banks of the eurozone and Britain have agreed to activate a currency swap mechanism that would ensure British banks continue to have the access they need to euros, even during any market turmoil related to Brexit.

The move seems to be an attempt to shore up the stability of British banks in the case of a “no-deal” Brexit, a scenario in which Britain could fall out of the European Union without a deal on trade relations. That could stress the financial system, and providing liquidity would be one way for the central banks to keep the financial sector going.

The European Central Bank said Tuesday it is working closely with the Bank of England to monitor conditions in financial markets and stands ready to act as needed.

The Bank of England has warned that “significant market volatility” is likely if Britain crashes out of the European Union on March 29 without a deal.

Minutes of the recent meeting of the bank’s Financial Policy Committee showed officials warning that in a “disorderly Brexit,” a range of financial assets, including the pound and stocks, “would be expected to adjust sharply, tightening financial conditions for U.K. households and businesses.”

They said that EU banks and insurance companies could also immediately face tougher requirements on their holdings of U.K. debts, which would reduce demand for U.K. assets.

However, the committee said markets have “proved able to function effectively through volatile periods” and that the U.K.’s core banking system is strong enough to withstand the economic shock of a disorderly Brexit

A senior British government minister insists that Brexit talks with the European Union are making progress, as negotiators meet in Brussels seeking a way to break the logjam.

Foreign Secretary Jeremy Hunt says “the signals we are getting are relatively positive.”

Their objections center on a provision to guarantee there are no barriers along the currently invisible Irish border. Britain wants reassurances the mechanism will be temporary.

EU leaders insist that the legally binding withdrawal agreement can’t be reopened. But Hunt told the BBC that Britain is “prepared to be flexible” about how changes are achieved.