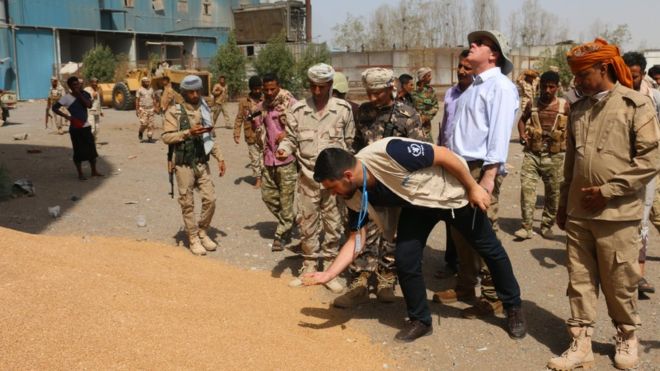 UN aid officials have for the first time in six months reached a vast store of desperately-needed food on the frontline in Yemen’s Hudaydah port.

The Red Sea Mills facility holds enough grain to feed 3.7 million people for a month, but the UN had warned the grain was at risk of rotting.

The Yemeni government and the rebel Houthi movement agreed a ceasefire around Hudaydah in December.

But they have yet to implement a UN-brokered plan to pull out of the port.

UN Secretary General António Guterres announced that a World Food Programme evaluation mission had been able to reach the Red Sea Mills at the start of an aid pledging conference in Geneva on Tuesday.

Member states have so far promised $2.6bn (£2bn) – a 30% increase on the amount pledged at a similar conference last year, but $1.6bn short of the total the UN hopes to raise.

Saudi Arabia and the United Arab Emirates are the biggest potential donors this year, having pledged $500m each.

The two countries are leading a coalition of mostly Sunni Arab states that intervened in the conflict in Yemen in March 2015 and imposed a partial blockade after President Abdrabbuh Mansour Hadi was forced to flee abroad by the Houthis – a group they consider to be a proxy of regional Shia power Iran.

Tens of thousands of people have been killed or injured since then, many of them civilians. Many more have died from preventable diseases, exacerbated by malnutrition.

The UN estimates that 24 million people – 80% of Yemen’s population – are in need of assistance. Up to 10 million of them are believed to be on the verge of famine.

“Donor governments pledging funds must work to resolve the obstacles that are preventing aid from reaching the people who need it, and to ensure that the aid delivered responds to their actual needs,” it said in a statement.

“Ultimately, Yemen’s humanitarian crisis can only be resolved when donor governments end their involvement in the war and hold the warring parties accountable for their atrocious conduct endangering the lives of millions.”

The Norwegian Refugee Council meanwhile said the pledges of donations fell short of what was required to help all those in need.

“While billions are spent on bombs and weapons bringing death and destruction, much less is made available to save lives of Yemeni civilians,” said Mohamed Abdi, its Yemen country director.

Amtrak train stuck in Oregon since Sunday is moving again