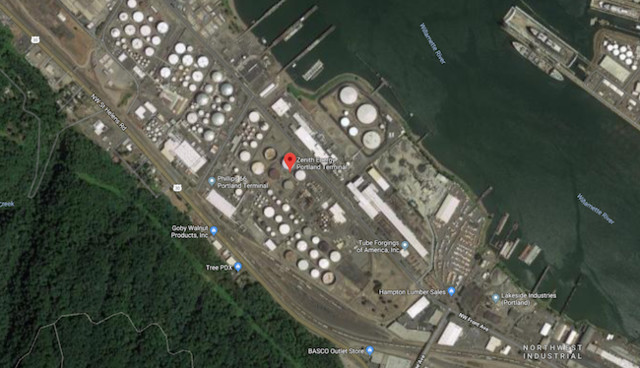 A Portland petroleum terminal is significantly expanding its capacity to unload rail cars, a move that sets the stage to more than double the number of oil trains along the Columbia and Willamette rivers into Oregon’s biggest city, OPB has learned.

Zenith Energy, sandwiched between the river and Forest Park in the city’s northwest industrial district, began receiving train shipments of crude from Canada’s oil sands last year, records show, which it stored in tanks and later pumped onto ocean-going vessels.

Zenith’s outpost in Portland now has visible construction underway on a project to build three new rail platforms that will nearly quadruple the site’s previous capacity for offloading oil from tank cars, according to building plans filed with the City of Portland in 2014, which the city’s Bureau of Development Services confirmed Wednesday.

When operational, a terminal with such a capacity could handle multiple oil trains per week — a sizeable increase over Zenith’s 2018 operations. According to Oregon Department of Environmental Quality estimates, the site handled fewer than 30 full oil trains throughout last year.

The site’s expansion of crude-by-rail infrastructure comes despite much public resistance in the Northwest for new oil projects. That includes a vote by Portland’s City Council in 2016 to oppose any new fossil fuel infrastructure. That same year the Northwest experienced firsthand one of the oil-train mishaps that have occurred across North America as more and more oil has been moved by what critics have dubbed “rolling pipelines” and “bombs trains.”

Public records and interviews with state officials indicate those trains would carry a kind of heavy oil that presents a new risk for Northwest communities and rivers, and one the state’s emergency spill responders say they are ill-equipped to contain if it spills.

“It greatly complicates the spill. It’s going to take a lot more money and time and cause a lot more harm to the environment probably,” said Scott Smith, who regulates the Zenith terminal’s oil spill preparedness as part of the Oregon DEQ emergency response program.

He said the increased oil-by-rail traffic creates a risk in Portland of an environmental disaster like the one in Michigan in 2010, when heavy Canadian oil spilled from a pipeline into the Kalamazoo River. It took more than five years and $1 billion to clean up.

“It’s really among the most challenging spills we have out there, and if it was a large spill, it would cause quite a bit of damage,” Smith said.

“The multi-million-dollar project will provide an even safer and more efficient operation,” Megan Mastal, a public-relations representative for Zenith Energy, said in an emailed statement.

The company also declined to say what products it would handle. Mastal disputed that Zenith would be handling what’s known as bitumen, which is a type of petroleum extracted from Canada’s oil sands. It is thick like peanut butter and often diluted with other petroleum products before it is transported.