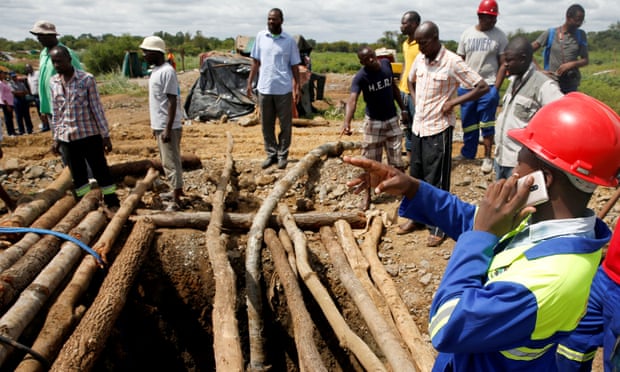 More than 40 illegal gold miners are believed to have died in Zimbabwe after they were trapped deep underground following a flash flood.

Police, engineers and other miners have struggled since Tuesday to reach any survivors of the accident, which took place in the town of Kadoma, 125 miles (200km) west of the capital, Harare.

About 60 miners are thought to have been working at about 11pm local time (2100 GMT) on Tuesday when heavy rains sent a wave of water pouring into shafts that were up to 100 metres deep.

Relatives searching for their loved ones said they had lost hope on Friday.

Kazius Zvikiti, 94, said of his two missing sons, Xavier, 47, and Marlon, 35: “I am old and I was relying on my children for survival. I don’t know how I am going to survive without them.”

Charles Mwenye, a 41-year-old survivor, said four of his friends were inside the shaft. “I could have been the one trapped underground too,” he said. “When I was on my way out of the shaft, I saw a flood coming straight in … Thank God I am alive. The police came yesterday and today but nothing has been done. All my hope is lost now.”

Mwenye said he and his friends earned a living as illegal gold miners since 2015 in areas surrounding the northern province of Mashonaland West.

Zimbabwe’s economy has collapsed in recent years, forcing thousands to try to feed themselves and their families by excavating in areas abandoned by major commercial companies. It is dangerous and physically gruelling work.

Kadoma and nearby areas are rich in gold deposits and popular with the artisanal miners who use picks and shovels and generator-powered water pumps. The makeshift shafts and tunnels can easily collapse in the rainy season when the ground is soft.

The miners, known locally as makorokoza, or hustlers, usually work at night using torches and can disappear into shafts and tunnels for more than two days.

The Centre for Natural Resource Governance (CNRG), a mining watchdog, blamed Zimbabwe’s environmental management agency for failing to protect lives by properly decommissioning disused mines. The NGO said the mine should have been sealed to avoid tragedies of this nature.

Lovejoy Mbedzi said her brother Evan Chibuwe, 29, has been missing since Wednesday. “I am very sad. This mine shaft is full of boys between the ages of 18 and 30. They are so young and don’t deserve to die in this manner,” she said.

Trapped miners have no funeral cover and relatives are pleading for government assistance. “I don’t have a funeral policy, burying my child will be very difficult,” said Idah Gwangwari, 60, who lost her son Donald, 20.

“I’ve been waiting since the day he went missing , hoping he would come back to me.”

Gold is the largest foreign currency earner for the struggling Zimbabwean economy and this makes illegal gold mining attractive to unemployed young people.

Fatal mine accidents occur frequently, though rarely on this scale.

Illegal gold miners last year contributed significantly to the record bullion output of 33 tonnes in the southern African nation. They sell their gold to a central bank subsidiary or private buyers.

Hong Kong seizes $1m worth of rhino horn at airport