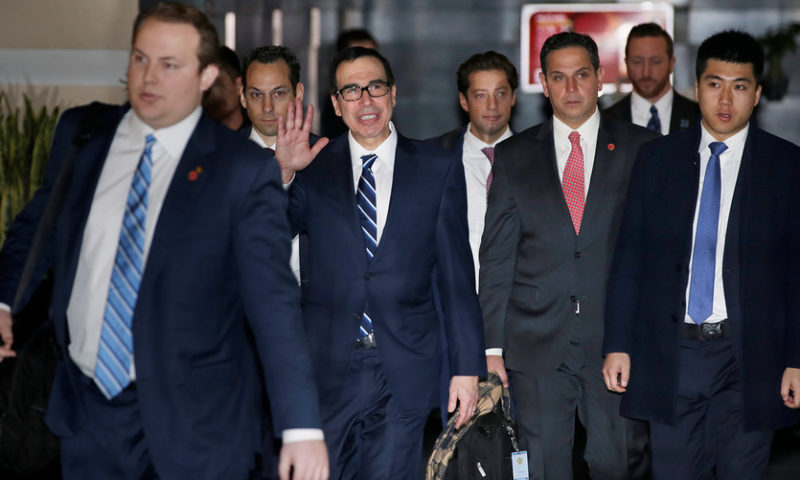 U.S. stocks closed higher Wednesday, trimming gains but with the S&P 500 and Nasdaq rising for a fourth straight session, after President Donald Trump said he may let a China trade-deal deadline “slide” if the two sides were making enough progress.

Trump said Tuesday that he would allow for flexibility on the timeline for a deal with China if an agreement looks close. Meanwhile, Chinese President Xi Jinping is expected to meet key members of the U.S. delegation on Friday, the South China Morning Post reported, citing sources.

A third day of bilateral trade negotiations were under way in Beijing, with Treasury Secretary Steven Mnuchin and U.S. Trade Representative Robert Lighthizer expected Thursday for more high-level discussions. The White House had previously referred to its stop points as a “hard deadline.” A 90-day trade truce ends on March 1, and tariffs on some $200 billion in goods had been set to be raised to 10% from 25% at 12:01 a.m. Eastern time March 2.

Meanwhile, Trump said a second government shutdown was unlikely even as he expressed unhappiness with a tentative agreement that allows for 55 miles of new border fencing reached by Democratic and Republican lawmakers late Monday.

Consumer prices were unchanged in January compared with the previous month, below the 0.1% increase in prices expected by economists per a MarketWatch poll. The year-over-year growth in prices as measured by the consumer-price index fell in January to 1.6%, from a rate of nearly 3% seen in July, a trend that has helped support the argument that the Federal Reserve doesn’t need to aggressively raise interest rates this year.

Atlanta Federal Reserve President Raphael Bostic said in a moderated discussion at the European Financial Forum Tuesday morning that he is predicting the Fed will raise rates one time in 2019.

Cleveland Fed President Loretta Mester told an audience in Lexington, Kentucky Wednesday morning that she doesn’t have an economic recession in her forecast, nor does she the U.S. in the midst of a housing bubble.

Philadelphia Fed President Patrick Harker also endorsed a single rate increase in 2019, while predicting a another hike would be appropriate in 2020, during a speech Wednesday to the Jewish Business Network luncheon.

“It’s possible to sustain this momentum, as we still see factors in the backdrop that remain fertile like modest inflation, continued economic growth, and a healthy consumer. What we’re most concerned about is whether earnings growth can be sustained. That’s the real issue over the intermediate term,” he said.

Xi’s planned meeting with U.S. negotiators “adds to signs that the two nations are willing to work things out. In our view, further positive remarks are likely to keep market sentiment supported, but for a sustained recovery in risk assets, like equities, we would like to see signatures,” Pissouros said.

Shares of Hilton Worldwide Holdings Inc. HLT, +6.79% rose 6.8% after the hotel operator announced a fourth-quarter adjusted profit and revenue that rose above expectations and provided an upbeat earnings outlook.

Interpublic Group of Cos. IPG, +4.75% shares gained 4.8% after the advertising giant announced it would raise its quarterly dividend 2% to $23.50 per share.

Shares of TripAdvisor Inc. TRIP, -5.71% were down 5.7% after the company announced earnings that fell short of analysts’ expectations.

Crude prices CLH9, +0.32% were higher after Saudi Arabia’s Energy Minister Khalid al-Falih told the Financial Times that the country would further reduce its oil production to near 9.8 billion barrels a day in March.

Why Morgan Stanley says ‘the stars are aligned’ for this asset