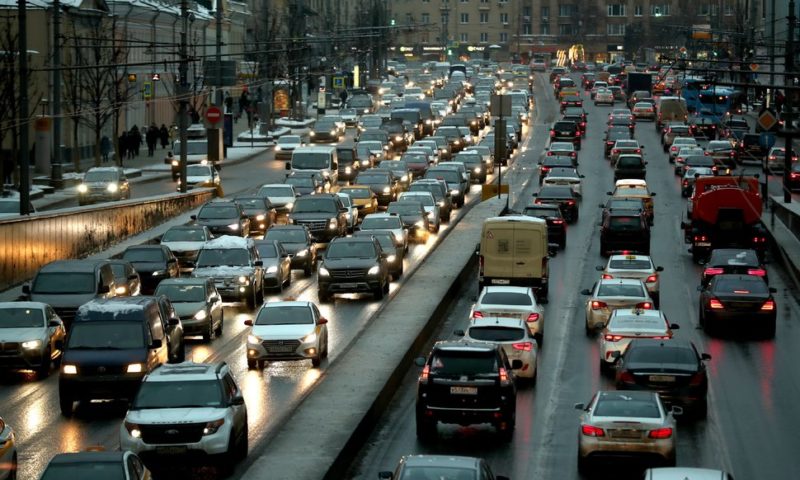 In one Russian city, residents spent the equivalent of almost nine days in 2018 stuck in traffic.

With drivers spending an average of 210 hours in peak rush hour periods last year, Moscow was the most traffic-congested city in the world in 2018, according to an annual scorecardby INRIX, a data analytics company that delivers insight into how people move around the world.

The 2018 traffic scorecard analyzed the per capita time spent in congestion, as well as its severity, in more than 200 cities across 38 countries. Rankings were based on the total number of hours lost in traffic during peak commute periods compared to free-flow periods as well as the average speed and the time it took to travel one mile into a city’s business district during rush hour.

“Congestion is an indiscriminate global phenomenon that is dramatically impacted by population, the economy, infrastructure and the proliferation of rideshare and delivery services,” the report says. “It also imposes massive costs both economically and socially.”

At about 272 hours on average, drivers in Colombia’s capital lost the most hours due to traffic congestion in 2018, according to the report.

In fact, four of the top 10 cities were in Latin America. That didn’t surprise authors, who noted “breakneck rates of urbanization, high levels of informal settlements, unforgiving topographies and financial volatility” in the cities make it difficult to improve mobility within them.

Russia and Brazil were the only two countries with more than one city on the top 10 most congested list.

As for the United States, the 2018 scorecard analyzed congestion and its severity in the top 60 urban areas. It found that Americans lost an average of 97 hours a year due to traffic, costing them $87 billion annually in time – an average of $1,348 per driver.

Boston, Massachusetts, was the only U.S. city to make the global top 10 list, and it topped the list of 10 most-traffic-congested cities in the U.S., with 164 hours and $2,291 lost due to congestion. Meanwhile, Washington, D.C. came in second both in terms of impact and time wasted, with 144 hours lost and drivers losing an average of $2,161 last year on their commute.

Among the country’s oldest and densest cities, New York City, San Francisco and Philadelphia were determined to have the slowest downtown business districts in the U.S.