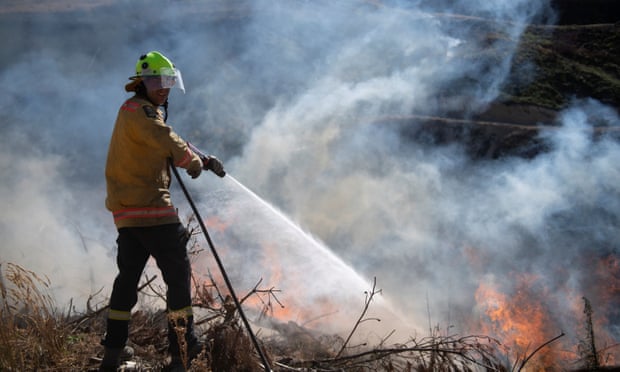 An estimated 3,000 people have been evacuated due to a huge blaze on the northern tip of the South Island

Fires that have ravaged parts of New Zealand over the last week could still be burning well into March, fire chiefs have warned.

Firefighters “turned a corner” in fighting the Tasman blaze on Sunday night, after working for seven days to contain the fire, which started last Tuesday.

The fire covers more than 2,300 hectares (5,700 acres) with a 25km (15 mile) perimeter. One home has been lost and roughly 3,000 people have been evacuated from the Wakefield and Pigeon Valley areas on the northern tip of the South Island of New Zealand due to the fire.

There were fears that Sunday would bring about a worsening of conditions, as strong winds fanned the flames.

However, higher humidity meant firefighters had a “good day”, said John Sutton, fire and emergency regional manager on Monday. Sutton said Sunday night was “one of the quietest nights” the firefighters have faced, allowing them to bring the fire under greater control.

“Our focus at the moment is moving more into the fire ground and concentrating on the moving heat and trying to widen the amount of containment all the way around the fire. We’ve made significant progress,” said Sutton.

However, he warned that the fight was not over.

“There’s still an enormous amount of heat there are and there are a lot of unburned areas,” he said. “Although I sense we might be turning a corner, there will be firefighters working on the fire well into March.”

Authorities were working to try to return evacuated residents to their homes on Monday.

“When you have to leave your home and in some cases your livestock and animals and you don’t know what’s become of them, and you’re staying with friends and family, then it’s an uncertain situation for everybody,” she said.

Much of the affected area south of Nelson was used for forestry but it also has many small farms. Some livestock has also been moved to safety.

Authorities have said they believe the original fire was caused by a spark from agricultural machinery.

Bushfires are relatively uncommon in New Zealand, but this is the second significant blaze in two years and follows a heatwave that pushing temperatures in some parts of the country to 30C.

Experts have warned that bushfires such as this one could become more common as New Zealand becomes drier and more drought-prone due to climate change.

“There’s a high risk that what we end up with is a more flammable landscape that is more vulnerable to fire,” George Perry, professor of environmental science at the University of Auckland, told the Guardian.

No ships, no ferry deal