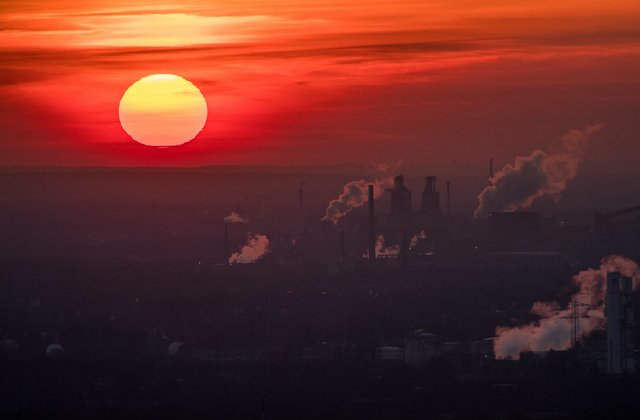 Fears over U.S. power and influence record the greatest jump in a public opinion study conducted in 26 countries.

CLIMATE CHANGE IS SEEN as the greatest threat to international security, according to a sweeping new survey of public opinion in 26 countries that also cites worries about cyberattacks, terrorism, North Korea, Russia – and the United States.

The findings from the nonpartisan Pew Research Center, published on Sunday, show that the people surveyed in 13 of the countries view climate change as the top international threat.

In eight countries, terrorism – specifically the Islamic State militant group – is seen as the top global threat in the Pew study, while people in four countries, including the U.S. and Japan, rate cyberattacks as the top risk.

Respondents in one country, Poland, rate Russia’s power and influence as the greatest threat to the world. Other threats named by people include North Korea’s nuclear program, the condition of the global economy and China’s power and influence, which ranked at the bottom of the Pew survey.

“While China’s power and influence is generally not seen as a top tier threat in most of the countries we survey, we have seen a steadiness over the question on China over the last couple of years,” Poushter says. “(But) people generally don’t see it as a major threat to their country.”

Notably, more people say that U.S. power and influence is a major threat to their countries now than in previous Pew surveys in 2017 and 2013. And while a median of less than half in the 26 countries say the U.S. poses a threat, about half or more of the respondents in 10 countries do see American power as a risk. That includes 66 percent in close ally Japan, and 64 percent in Mexico, where U.S. President Donald Trump is deeply unpopular. In South Korea, the same proportion of people surveyed – 67 percent – see the U.S. as an equal threat as North Korea.[

“But even though (this threat) has been increasing especially between 2013 and 2017, it’s not the highest threat in any of the countries we’ve surveyed,” Poushter says.

International concern over American power and influence experienced the greatest change in recent years, according to the study.[

In 2013, a quarter of people surveyed in 22 countries (U.S. public opinion was excluded) saw U.S. power as a threat to their country. That figure jumped to 38 percent in 2017, the year after Trump was elected, and to 45 percent in 2018, when this Pew study was conducted. The most dramatic increases in concern from 2013 to 2018 were recorded in Germany (an increase of 30 percentage points), France (29 points) and Brazil and Mexico (26 points).

The study also drew a strong tie between seeing the U.S. as a threat and a lack of confidence in U.S. President Donald Trump. A separate global survey of more than 20,000 people released in late January shows the U.S. as being seen as less trustworthy than in previous years.

The Pew findings show rising levels of public concern on a number of other issues. For example, in 2013, before the Paris climate agreement was signed, an average of 56 percent of people in 23 countries listed global warming as a top threat. Since then, France and Mexico have recorded the biggest increases in public concern about climate change, but the U.S., the U.K., Germany, Spain, Canada, Kenya, Poland and South Africa have also been recorded double-digit increases in public concern.

In 2013, a little less than half of people surveyed rated North Korea’s nuclear program as a major threat. The overall level of anxiety has risen, most sharply in countries in Africa and Latin America.

Worries about cyberattacks have also seen a sharp jump in concern in recent years, with the greatest increases being witnessed in Germany, France, Mexico, Brazil, Spain and Tunisia.

“We know that there has been an increase in cyberattacks using cyber tools (in the world) so there is definitely an increase in the number of people who say it’s a major threat,” Poushter says.

Sunday’s Pew study follows a report released last year by the Intergovernmental Panel on Climate Change that warned of serious short- and long-term concerns about the impact of climate change. That report said people around the world need to make immediate changes in the way they eat, travel and live or face even more extreme weather.

The U.N. has said the past 18 years have been the warmest on record for the planet since the 1850s, when measurements began. Scientists say greenhouse gases, including carbon dioxide from fossil fuels such as coal, oil and gas, are the primary causes for global warming.

The Pew survey was conducted among 27,612 people in the 26 countries from May to August of last year. The findings will be presented on Feb. 15 at the Munich Security Conference.