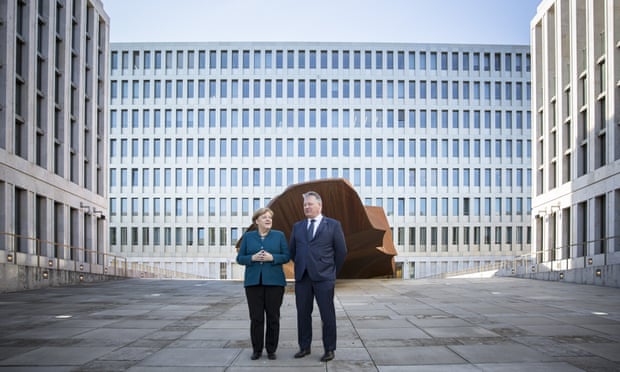 No mobile phones. No private laptops. No checking personal emails or social media. And at the end of the day, all access cards must be locked in a safe.

The building, close to the route of the former Berlin Wall, is one of Germany’s most secretive spaces, with strict security rules governing what employees there can and cannot do.

Angela Merkel visited the headquarters on Friday and spoke of the BND’s history and the important role it plays. “In an often very confusing world,” the chancellor said, “now, more urgently than ever, Germany needs a strong and efficient foreign intelligence service.”

The site previously housed police barracks, destroyed during the second world war. It then became the site of an East German sports stadium, demolished as part of Germany’s bid to host the 2000 Olympics.

Approximately 3,200 of an expected 4,000 employees have already arrived and are working at the new building, with others yet to move up from the old headquarters outside Munich. The agency employs about 6,500 people in Germany and around the world.

Its bold new presence is meant to signal a more self-confident global role but the agency is not without critics in Germany, where security services can evoke memories of the Stasi and Gestapo. Revelations in 2013 from Edward Snowden that the agency closely cooperated with US and British services in the surveillance of digital communications shocked many and led it reduce cooperation with the US National Security Agency.

Suspicions among some had also focussed on the fake palm trees outside the building, which the Berlin senate in January confirmed were an art installation and not covert listening devices.

The opening ceremony on Friday was a long time coming: the building was originally scheduled to be finished in 2011 but this was delayed by construction issues, and for other reasons.

In 2015 thieves stole taps from toilets across the building, resulting in flooding and damage, in an incident nicknamed “Watergate” in the German press.

Ikea apologises after leaving New Zealand off a map