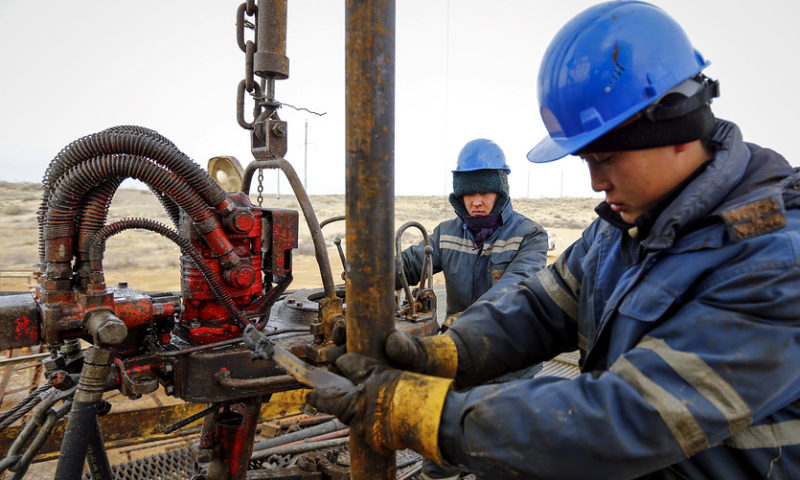 Oil futures were stuck in a tight trading range Friday, with the U.S. benchmark ending slightly higher but suffering a weekly loss of nearly 5%.

Traders continued to assess risks to global supply from OPEC output cuts and U.S. sanctions on Venezuela, which offered support to prices, but signs of a weakening global economy raised concerns about a slowdown in energy demand.

U.S. benchmark March West Texas Intermediate crude oil US:CLG9 rose 8 cents, or 0.2%, to settle at $52.72 a barrel on the New York Mercantile Exchange, after trading between a low of $52.08 and high of $52.99. Prices finished 4.6% lower for the week, the largest weekly loss since the week ended Dec. 21, according to Dow Jones Market Data.

The weekly drop was fueled by Thursday’s sharp retreat, which came amid worries about energy demand, a stronger dollar that makes U.S.-priced commodities less attractive, and reports that Libya could soon increase production. China-U.S. trade uncertainty and a vulnerable stock market are adding to the worrisome economic picture highlighted by oil bears.

U.S. President Donald Trump indicated that meeting Chinese President Xi Jinping when he’s in Asia at the end of the month may be too soon in terms of trade negotiations, said Marshall Steeves, energy commodities analyst for Informa Economics. “Of course that is just when tariffs would revert to their higher rates,” he said, with the March 1 deal deadline. Higher tariffs “would be problematic for global economic growth if implemented.”

So “that’s keeping pressure on oil prices and effectively canceling out the supportive impact of declining Venezuelan output alongside declining output by Saudi Arabia and Russia,” Steeves told MarketWatch. “I think the fact that U.S. production is holding at a weekly record high of 11.9 million [barrels per day] while inventories build up has also been a bearish indicator over the past three days.”

On Friday, data from Baker Hughes BHGE, +0.90% reported a weekly rise of 7 in the number of active U.S. rigs drilling for oil—hinting at a future rise in production activity.

Meanwhile, the ICE U.S. Dollar Index DXY, +0.07% was up a touch, trading 1.1% higher for the week. The gauge was trying for a seventh advance in a row, according to FactSet. A richer dollar makes those commodities priced in the unit less attractive to investors using another currency.

The decline in oil prices this week came as the European Commission slashed growth forecasts for the eurozone and its major economies sharply for 2019 and 2020, further stoking concerns of a global growth slowdown.

As for the supply picture, a Libyan general took control this week of the country’s largest oil field, the Sharara, raising the likelihood the facility will restart production, according to The Wall Street Journal. Libya, a member of the Organization of the Petroleum Exporting Countries, is currently exempt from the cartel’s agreement to curb production due to the civil unrest that has plagued its oil industry and economy.

OPEC and 10 partner producers outside the cartel agreed late last year to hold back crude output by 1.2 million barrels a day for the first half of 2019, in an effort to sop up that global supply glut and rebalance the market. OPEC, excluding Iran, Libya and Venezuela, agreed to handle 800,000 barrels a day of those cuts. Also reported this week, OPEC officials said Saudi Arabia and its Persian Gulf allies were looking to create a formal partnership with a 10-nation group led by Russia to manage the world’s oil market.

Oil remains higher for the year to date, with WTI front-month contract prices up about 16%. The political crisis in Venezuela was part of the reason prices were rising in previous weeks, but this seems to have been priced in by now, some analysts have said.

Natural-gas futures bounced back somewhat on Friday after settling at a two-year low Thursday. The sharp drop a day earlier came as a weekly tally of U.S. supplies from the Energy Information Administration showed a a smaller-than-expected decline of 237 billion cubic feet for the week ended Feb. 1.

Cisco earnings: Tariffs and demand could weigh on outlook