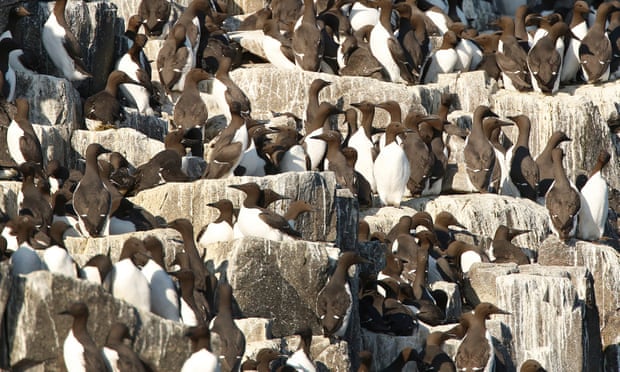 Scientists are scrambling to understand the sudden death of an estimated 20,000 guillemots off the Dutch coast, hundreds of which are washing up on the country’s shoreline.

The bodies of the birds, which spend most of their lives at sea where they dive for their food, started emerging over the past month, from the Wadden Islands in the north to Zeeland in the south.

Mardik Leopold, a biologist from Wageningen University, said the Netherlands “had not seen such mass deaths since the 1980s and 1990s”, describing it as “rather a major incident”. Hundreds more sickly birds have been taken into sanctuaries for treatment.

“The working hypothesis is that it is a combination of bad weather plus something else, and we are trying to find the smoking gun,” Leopold said. “We have dissected some of the birds. They are clean but they were very skinny, with gut problems, which is indicative of starvation. But we need a larger sample and so have been asking people to collect birds for us.”

One possible cause of the seabird wreck – the technical term for such sudden unexplained mass deaths – is the contents of 291 containers lost from a large container ship during a storm on the night of 2 January, north of Ameland, an island north of Amsterdam.

A salvage operation to retrieve the containers belonging to the Mediterranean Shipping Company has so far involved 16 ships trawling the North Sea with the aid of an echo device, and is expected to last for another six months.

About 50 of the containers are still missing, but the operation is under time pressure as the heavy containers will sink into the sandy seabed.

“We don’t know exactly what was in the containers but there will inevitably be plastic and chemicals,” Leopold said. “What is strange is that I have been in contact with colleagues in Germany and Belgium, and they maybe have had one or two more dead birds, but nothing that has alarmed them.”

Veterinary pathologists are expected to dissect about 100 guillemots in the coming days in an attempt to uncover the problem.

“A dead bird is found on every kilometre of beach along the Dutch coast every day, and the rate is steady, it isn’t dropping off,” Leopold said.

Around 2% of the total guillemot population – more than 130,000 birds – is found in the Dutch North Sea, where a favourite habitat is the protected Frisian Front, north of the Wadden Islands.

Rough weather regularly leads to weaker birds washing up on the Dutch coast, but rarely in such large numbers. Guillemots, which breed among the cliffs, are vulnerable to human-caused pollution as they dive for their feed of fish and crustaceans.