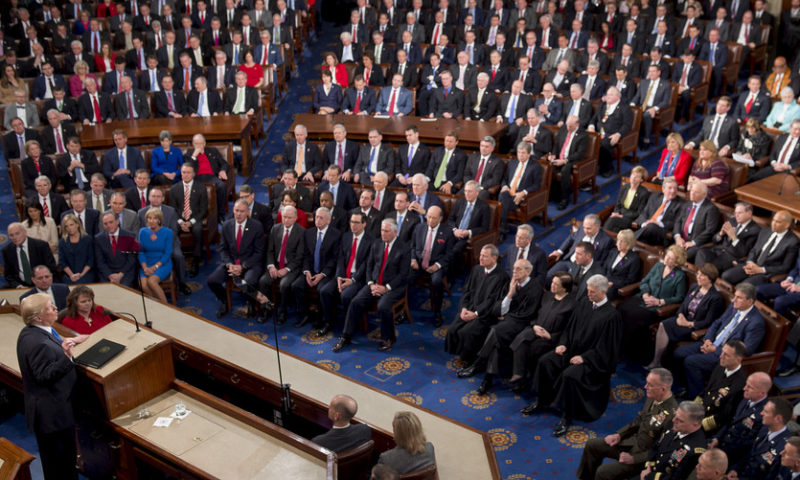 Stocks closed higher Tuesday, with the S&P 500 extending its winning streak to a fifth session, as investors continued to sort through corporate earnings while awaiting President Donald Trump’s State of the Union address in the evening.

The market’s mood remained buoyant, with investors tying strength to earnings that were perceived as upbeat. Tech shares were instrumental in paving the way higher, although Google parent Alphabet Inc. came under temporary selling pressure after its quarterly results showed costs rising faster than expected.

Trump is set to deliver his State of the Union address at 9 p.m. Eastern time Tuesday. Analysts said investors could prove more sensitive than usual to headlines surrounding the speech, given market jitters over U.S.-China trade talks and the prospects of another government shutdown if the White House and congressional Democrats are unable to agree to a deal on funding for a southern border wall before the current stopgap funding measure runs out later this month.

Federal Reserve Chairman Jerome Powell dined Monday night with Trump and Treasury Secretary Steven Mnuchin. However, they didn’t discuss expectations for monetary policy, “except to stress that the path of policy will depend entirely on incoming economic information and what that means for the outlook,” the central bank said in a statement.

The U.S. services sector expanded at a slower pace in January, according to the Institute for Supply Management’s nonmanufacturing index, which fell from 58.0 in December to 56.7 last month, below economists’ expectations of a 57.4 reading, per a MarketWatch poll. A reading above 50 indicates an expansion in activity.

The Markit services PMI also registered a decline from 54.4 in December to 54.2 in January.

The U.S.-China trade dispute, however, remains the major headwind preventing the next leg higher, he said, but if investors do get good news on that front, “You’d better get in the market,” arguing that a strong labor market will underpin the type of consumer demand that should keep the current expansion going beyond 2019.

“The speech is going to be closely monitored by investors, keen to get an update on trade talks with China and border security, or more specifically the wall, which led to the longest-ever government shutdown last month and could trigger another in just over a week,” said Craig Erlam, senior market analyst at Oanda, in a note.

“There have been plenty of reports that Trump is considering using emergency powers to deliver on his promise of border wall funding and this could be the platform for it, or at least a strong hint of an intention to do so,” Erlam said.

Alphabet GOOG, -0.23% GOOGL, -0.09% bounced back from earlier weakness with its class A shares gaining 0.9%. The tech giant had reported stronger-than-expected earnings but investors took exception to a sizable jump in spending.

Shares of Estée Lauder Cos. EL, +11.64% rallied 12% after the cosmetics company posted fiscal second-quarter earnings and sales beats and raised its full-year outlook.

Seagate Technology PLC STX, -0.92% fell 0.9%, failing to hold on to gains in the wake of better-than-expected quarterly results.

Shares of Church and Dwight Co. Inc. CHD, -7.51% skidded 7.5% after the consumer products company said that its profit fell 64% in the fourth quarter.

Shares of Pain Therapeutics Inc. PTIE, -10.83%  tumbled 11% after the companyissued an unusually critical statement concerning a recent meeting with the Food and Drug Administration to discuss its abuse-deterrent gel formulation of the painkiller oxycodone.

Japan’s Nikkei 225 NIK, +0.14% closed down 0.2% but markets in much of the rest of Asia, including those in Korea, China, and Hong Kong, were closed for the Lunar New Year holiday.