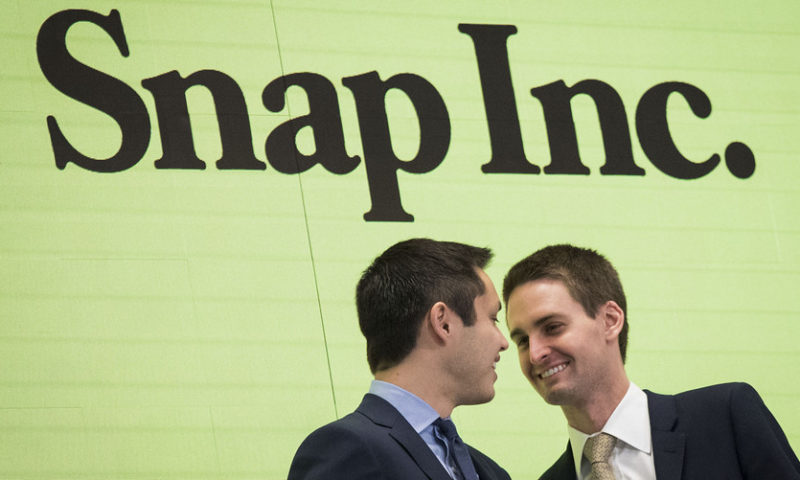 Snap earnings: Well, this could be a doozy of a conference call

When Snap Inc. last reported earnings, the biggest concerns were the redesign of Snapchat and a declining user base.

Ah, what an innocent time.

In just the first month of 2019, Snap SNAP, +1.73% experienced two controversial executive departures that have raised questions about stability at the young app company. The new, high-profile chief financial officer — Tim Stone, who was poached from Amazon.com Inc. — left the company suddenly, and Bloomberg News later reported that he left after attempting to circumvent Chief Executive Evan Spiegel by going to the board and requesting more power and a higher salary.

Stone instituted financial forecasts at Snap and generally boosted the opinion of the company on Wall Street. It took Snap two weeks just to name an interim replacement at CFO, which it finally did last week by putting Chief Accounting Officer Lara Sweet into the role on a temporary basis.

Just three days after Stone announced his departure, the head of Snap’s human-resources department and its director of global security reportedly departed amid scandal. According to The Wall Street Journal, security chief Francis Racioppi allegedly hired a six-figure contractor with whom he had a romantic relationship, and terminated the contract after they broke up. Racioppi’s boss, HR chief Jason Halbert — who had already been a source of controversy — was also pushed out for the incident, according to the Journal’s sources.

These events brought concerns about Snap’s ability to build a strong leadership team around Spiegel back into the light. When Snap reports fourth-quarter earnings Tuesday afternoon, Spiegel will have the stage on a conference call and could address those doubts, defend his stewardship of Snap and have a doozy of a conference call.

Then again, he could also just stick to Android app updates and how Snap is going to keep making more money out of a smaller user base.

“Management turnover has garnered all of the recent headlines for Snap, but we’re not expecting much commentary around the recent departures,” Nomura Instinet analysts wrote in a preview. “We do expect the company to focus on the Android redesign, which in our view is one of the most important issues the company faces, and we anticipate there will be plenty of commentary about the newer ad formats such as Pixel.”

When Snap announced Stone’s departure, it disclosed that executives “expect to report revenue and adjusted Ebitda results that are slightly favorable to the top end of our previously reported quarterly guidance ranges for each.” The company said in the last earnings report that it expected an Ebitda loss of $75 million to $100 million.

Revenue: Analysts on average expect revenue of $377 million, according to FactSet, after reporting $286 million a year ago. Snap guided for revenue of $355 million to $380 million. Contributors to Estimize expect $376.2 million on average.

Stock movement: Despite downgrades and concerns after Stone’s departure, Snap has had a strong month heading into earnings, with gains of 16.5% over the past month, as of Monday’s close, as the S&P 500 index SPX, +0.68%  has gained 7.6%. Still, shares are down 49.5% in the past year and well off the initial public offering price of $17 a share.

The Nomura preview noted that social-media rival Facebook Inc. FB, +0.09% spoke at length after releasing a big earnings beat last week about efforts to put more ads in the Stories format, which Snap pioneered. Those analysts, who have a neutral rating and $6 price target on Snap stock, believe that bodes well for Snap.

“We think the Facebook results from earlier in the week illustrate that advertisers are shifting toward Stories as users spend more time with that format,” they wrote. “The main hurdle for Snap is its smaller user base relative to Instagram (FB notes 500mn Stories DAUs), though the advertiser tools seem to be in place if the ship starts to right itself.”

Morgan Stanley analysts, who reduced their price target on Snap shares from $7 to $5 last month, don’t expect that trend to help Snap as much because of “ad performance and monetization challenges around the ‘Stories’ format.”

“We also hear of ad dollars moving away from Snap toward Facebook given Facebook’s reach and targeting advantage,” they wrote.

SunTrust Robinson Humphrey analysts are also dubious that Snap has been able to command sizable parts of advertising budgets based on its competition in the digital-ads space.

“The duopoly of Google GOOGL, -2.14% GOOG, -1.87%  for Search and Facebook/Instagram for Social, along with a rapidly growing AmazonAMZN, +0.68%   for e-commerce have created a very competitive market for Snap to scale rapidly,” wrote the analysts, who have a hold rating and $8 price target on Snap shares. “We often hear from marketers that Snap remains in an experimental bucket where marketers are testing various ads but not substantially increasing their spend.”

RBC analyst Mark Mahaney downgraded Snap after the CFO departure, to sector perform from outperform, and broke down the difficult investment thesis for Snap right now.

“Fundamentals have been very uneven since the company’s IPO,” Mahaney wrote. “Our belief is that this has in part been due to severe competitive pressures (from Facebook), but also due to very uneven execution.”

Michael Pachter of Wedbush is one of the few analysts who remain bullish on Snap, with an outperform rating and $12.25 price target on the stock.

“Snap is positioned to drive revenue growth and approach profitability off of its already quite large DAU base when its management demonstrates a desire to do so,” Pachter wrote in an earnings preview. “The company has taken several steps to improve the utility of its app, increase user engagement, and explain its value proposition to advertisers, and pending evidence to the contrary, we remain confident that Snap will turn the corner sooner rather than later.”

Pachter, though, does not believe that Snap will provide much in the way of a forecast in this call.

”Until Mr. Stone is replaced by a regular, full-time CFO, we don’t expect anything more than bare-bones guidance, if any,” he predicted.

FactSet tracks 37 analysts who cover Snap, and four have the equivalent of buy ratings on the stock, with 24 rating it a hold and nine calling it a sell. The average price target as of Monday afternoon was $6.93, about 0.4% lower than current levels.