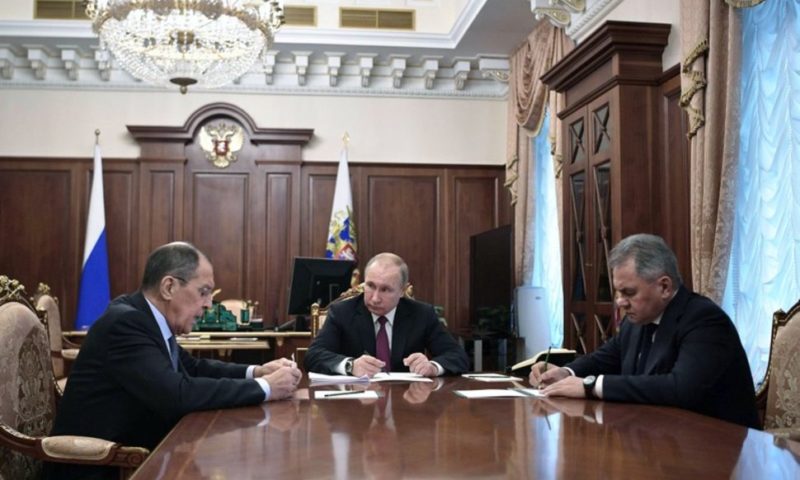 MOSCOW – Russia will race to develop two new land-based missile launch systems before 2021 to respond to Washington’s planned exit from a landmark nuclear arms control pact, it said on Tuesday.

President Vladimir Putin said at the weekend that Russia had suspended the Cold War-era Intermediate-range Nuclear Forces Treaty (INF), which bans both nations from stationing short- and intermediate-range land-based missiles in Europe.

Moscow and Washington accuse each other of violating the treaty and Putin said Russia had acted after the United States announced it was withdrawing from the pact.

Washington had made clear it planned to start research, development and design work on new missile systems and Moscow would do the same, Putin said.

The Russian military should start work on creating land-based launch systems for an existing ship-launched cruise missile, the Kalibr, and for longer-range hypersonic missiles which travel at least five times the speed of sound, he said.

Shoigu, a close Putin ally, said he wanted the work completed by the end of next year so the new systems were ready by 2021.

“From Feb. 2, the United States suspended its obligations under the INF treaty,” Shoigu told a meeting of defense chiefs.

“At the same time they are actively working to create a land-based missile with a range of more than 500 km which is outside the treaty’s limits. President Putin has given the defense ministry the task of taking symmetrical measures.”

Moscow denies flouting the 1987 pact. It says Washington is the one violating it and has accused the United States of inventing a false pretext to exit a treaty it wanted to leave anyway in order to develop new missiles. Washington denies that.

U.S. disarmament ambassador Robert Wood told a U.N.-sponsored Conference on Disarmament in Geneva on Tuesday that the United States would reconsider its withdrawal from the INF treaty “should Russia return to full and verifiable compliance.”

“This is Russia’s final opportunity to return to compliance,” Wood said.