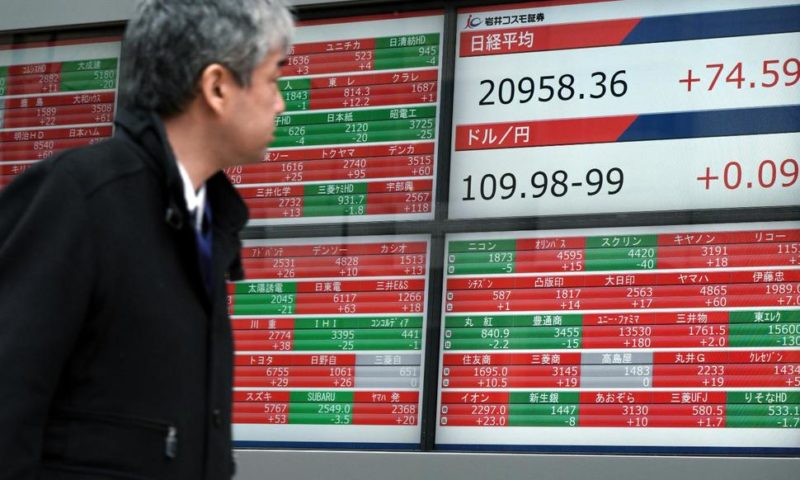 BANGKOK — Shares are lower in most markets open in Asia with much of the region taking a break for the Lunar New Year.

Shares edged lower in Japan and India on Tuesday but surged 2.1 percent in Australia following a report on banking malpractices that was less severe than anticipated.

The weak showing followed a day of gains on Wall Street as buying of technology companies outweighed losses in health care, materials and utilities stocks.

Markets in mainland China are closed for the week for new year festivities.

WALL STREET: The market got off to a weak start Monday after the government reported that factory orders fell in November, but by midday major indexes had turned higher as attention turned to strong corporate earnings. The S&P 500 index rose 0.7 percent to 2,724.87 and the Dow Jones Industrial Average climbed 0.7 percent to 25,239.37. The tech-heavy Nasdaq composite gained 1.2 percent to 7,347.54, while the Russell 2000 index of smaller companies picked up 15.48 points, or 1 percent, to 1,517.54.

FACTORY ORDERS: The government report showed U.S. factory orders declined 0.6 percent in November, mainly due to lower demand for machinery and electrical equipment. That surprised economists, who had forecast a slight increase. The report is one of many that were delayed by a monthlong government shutdown. The long list of missing indicators makes it difficult to gauge the health of the economy and has prompted a cautious outlook from analysts.