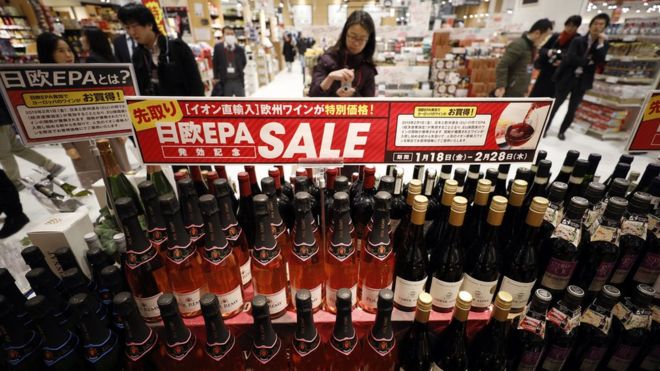 Cheaper wine and cheese for Japan, cheaper cars for the EU – part of what the EU-Japan trade deal, now in force, means.

The world’s biggest such deal, it covers nearly a third of global GDP and 635 million people.

However there are warnings that the UK could lose its benefits if it leaves the EU without an agreement.

It comes as a trade war rages between the US and China, who have slapped tariffs on each others’ products.

The EU’s Jean-Claude Juncker said the pact, which took years to agree, was about “values and principles”.

Here are five things about the deal:

1) Services as well as Sancerre and Suzukis

The deal’s headline is about scrapping duties on 97% and 99% of Japanese and European imports respectively.

Dairy and other food products are among the EU’s biggest exports to Japan and the progressive reduction of nearly €1bn ($1.1bn; £0.9bn) of tariffs – nearly 40% on beef, up to 30% on chocolate, 15% on wine and up to 40% on cheese – could boost exports and create jobs.

Going the other way, the EU will reduce the 10% duties on car imports to zero by 2027. Japan’s government estimates it could increase GDP by 1%.

However, the deal also provides better access for services firms, allowing them to bid for more public contracts.

Japan has not historically been that active in free trade talks internationally – but that has now changed.

It led negotiations to salvage a Pacific trade deal – the Comprehensive and Progressive Agreement for Trans-Pacific Partnership, or CPTPP – after the US pulled out.

That and its EU deal mean 2019 has already seen Japan enter a free trade sphere of a billion people.

“Our country does not produce natural resources. Our strength is that we have people – a quite well-educated population that is fairly diligent in doing things,” he said.

“And in order to utilise that asset, we do have to have interaction with the outside world, and that definitely means free trade, and creating a more liberalised investment climate.”

The prospects for British exporters are much less certain. If the UK leaves the EU without a deal at the end of March it will fall out of the new free trade area.

If it agrees a deal, it is set to remain in the EU-Japan trade deal during the Brexit transition period.

Japan’s government has promised to negotiate an ambitious new free trade deal with London – but only once the future relationship between Britain and the EU is fixed.

The UK’s Department for International Trade has said the EU-Japan trade deal would increase UK GDP by up to £3bn “in the longer term”.

Trade Secretary Liam Fox says he wants to use the deal as the basis for a “new, even stronger partnership after we leave the EU”.

The deal is the first struck by the EU to include a specific provision on the Paris climate agreement, which – until the US announced its intention to withdraw – united the world in a single agreement to prevent global warming by reducing emissions.

The EU and Japan have agreed that trade could make a “positive contribution” in the fight against rising temperatures.

Last February EU trade commissioner Cecilia Malmstrom said a reference to the Paris deal would be required in all new trade deals.

However some campaigners have questioned whether the EU would be willing to risk trade by insisting on compliance.

In December a report from the Institute of International and European Affairs said that the US withdrawal had created political cover for others to go slow on their commitments.

5) Where does it leave the US and China?

As Japan, Europe and Pacific-bordering nations dismantle tariffs, the world’s two biggest economies are busy putting them up.

But their companies could lose out in other markets too. US beef may lose some appeal in Japan now that European beef is cheaper, while US cars may become less competitive in CPTPP nations where Japanese cars have become cheaper.

China meanwhile could see production in some areas such as garments move to CPTPP countries to benefit from lower duties, the Nikkei Asian Review reported.

Japan is about to begin negotiations with the US towards a bilateral trade deal. Negotiations between the EU and the US have stalled while talks between China, Japan and South Korea over a trade deal have not yet resulted in agreement.