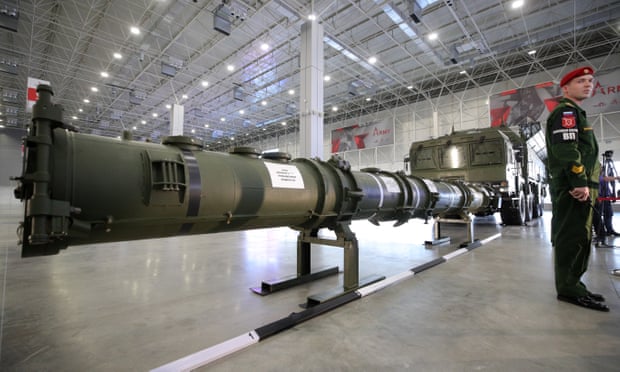 Donald Trump has confirmed that the US is leaving the Intermediate-range Nuclear Forces (INF) treaty, saying “we will move forward with developing our own military response options” to Russia’s suspect missile.

In a written statement, Trump said that the US would be suspending its compliance with the 1987 treaty on Saturday, and would serve formal notice that it would withdraw altogether in six months.

He left the door open to the treaty being salvaged in that 180-day window, but only if Russia destroys all of its violating missiles, launchers and associated equipment. Since 2013, the US has alleged that Russia has developed a new ground-launched cruise missile which violated the INF prohibition of missiles with ranges between 500km and 5,500km.

Russia for several years denied the missile existed but has more recently acknowledged its existence, saying its range does not violate INF limits.

“This is in reality, under international law, Russia’s final chance,” a senior administration official said. “If there is to be an arms race, it is Russia that has undermined the global security architecture.”

In his statement, Trump warned that unless Russia destroyed its missile by August: “We will move forward with developing our own military response options and will work with Nato and our other allies and partners to deny Russia any military advantage from its unlawful conduct.”

Washington’s European allies have been anxious that the death of the INF treaty would lead to a return to the tense days of the 1980s, and an arms race involving short- and medium-range missiles on European soil.

But a senior administration official said any new missiles were still in the research and development phase and deployment was far from imminent. He insisted that the US was only considering conventional missiles in the INF-prohibited range.

The official said that while Putin’s development of the new missile was primarily in response to new Chinese capabilities, for the US, “this has nothing to do with China”.

“For the US, this is about the threat to arms control and to European security,” the official said.

In remarks shortly before the president’s statement was released, the secretary of state, Mike Pompeo, said: “Countries must be held accountable when they break the rules. Russia has jeopardized the United States’ security interests, and we can no longer be restricted by the treaty while Russia shamelessly violates it.”

In his statement, Trump said his administration “remains committed to effective arms control that advances United States, allied, and partner security, is verifiable and enforceable, and includes partners that fulfill their obligations.”

However, neither the Trump nor Pompeo gave any indication whether the administration would agree to extend the 2010 New Start treaty, the last remaining arms control agreement constraining the arsenals of the two major nuclear weapons powers.

Both the US and Russia have abided by the New Start limit of 1,550 deployed, strategic nuclear warheads, but the treaty expires in 2021, leaving little time to negotiate a five-year extension.

Alexandra Bell, a former state department arms control official and senior policy director at the Centre for Arms Control and Non-Proliferation, said: “New Start is working, it’s good for American national security and this administration is putting global security at risk by foot-dragging on extension.”

France puts up food and drink prices under new law