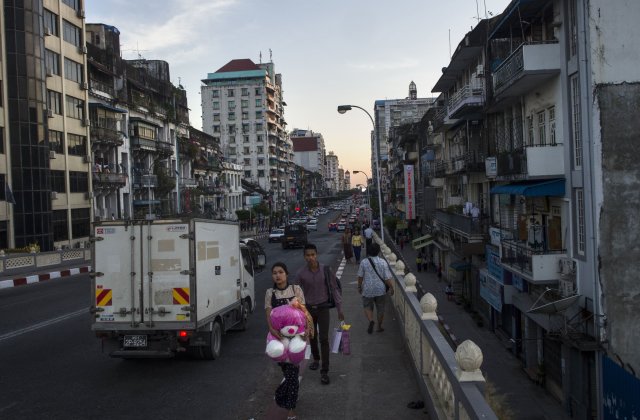 A slowdown tied to the country’s treatment of its Rohingya minority may open the door for China.

YANGON, MYANMAR — ALONG the cobblestone streets inside Bogyoke Aung San Market, the sprawling colonial-era shopping center that draws both local shoppers and international tourists, Zat is one of hundreds of vendors trying to entice shoppers. The bazaar offers goods and services ranging from antiques to clothing, from handicrafts to trading money on the black market.

The 30-year-old Zat says business at his family-run art shop has dropped sharply in the past year. Not long ago his shop would sell as many as seven paintings a day, he says. Today Zat says his family is lucky to sell one painting a day as customers are no longer interested in art depicting politician and Nobel Peace Prize laureate Aung San Suu Kyi, formerly a top seller at his shop.

Once an international icon of democracy who spent nearly 15 years under house arrest by the then-ruling military junta, Aung San Suu Kyi today draws criticism for her apparent inaction to the government’s persecution of the Rohingya Muslim minority, refusal to acknowledge military massacres and defense of government prosecutions of journalists. “Some artists are still making pictures of her, but mostly now they’ve stopped,” Zat says.

The dwindling consumer appetite for portraits at Zat’s shop is part of a larger economic slowdown in the country, one tied to Western criticism and sanctions over the Myanmar government’s alleged role in violence committed against the Rohingya and other ethnic minorities.[

Investment and tourism from Western countries has significantly dropped in the past year, and looming future sanctions from Europe threaten the country’s lucrative textile industry. Western sanctions against Myanmar may not have their intended consequences, observers say: The government is recalibrating its economic policies for a more regional approach, with a familiar patron of the past, China, poised to play an increasingly important role.

Both the U.S. and the European Union have leveled sanctions on Myanmar, a predominantly Buddhist country of 52 million people with more than 100 ethnic groups. Violence that began in 2016 in the country’s western state of Rakhine has since pushed nearly 700,000 Muslim Rohingya to flee to neighboring Bangladesh in what U.N. investigators allege as the military’s continuing practice of genocide.

Myanmar’s government has played down Western criticism in a bid to reassure investors of the potential of Myanmar’s economy. Last autumn, however, the director of the country’s investment directorate acknowledged that he had sorely underestimated the impact of Western action on the country’s economy.

“I thought the government could easily resolve the problem,” Aung Naing Oo, director general of the Directorate of Investment and Company Administration, said in September. “But two years later as a consequence of such events you can see FDI (foreign direct investment) in Myanmar is declining.”[

Investors from the West that were once in a wait-and-see pattern have since backed away, say several officials familiar with Myanmar’s economy. Approved FDI in the first four months of the 2018 financial year, which began last April, reached just $1.34 billion, down from $3.14 billion during the same period a year before, according to DICA.

“The majority of Western countries have been trying to abandon us for some time because of the sentiment of those issues,” says Hanta Myint, chairman of the economic committee for Aung San Suu Kyi’s ruling National League for Democracy, referring to the country’s treatment of the Rohingya.

Prior to the Rohingya crisis, Myanmar’s government projected that by 2020 the country would annually attract 7.5 million visitors. But now given the recent growth rates of the economy – now pegged at just 2 percent annually — the country is not likely to reach 2 million, according to a report by the Australia-based Centre for Aviation.

The number of European tourists, one of the largest constituents of that sector, are down by as much as half, says Thet Lwin Toh, chairman of the Union of Myanmar Travel Association. “Although a potential destination, Myanmar has (suffered from) a negative media impact, especially from the situation in Rakhine,” he says. “The country’s image is declining.”

Occupancy in hotels at popular tourist destinations such as Mandalay, Inle Lake and the Bagan archaeological zone have plummeted to as little as 20 percent, he says.

In September, Southeast Asian online travel guide Travelfish suspended its research into Myanmar as the situation in Rakhine has made the publication’s continued support of Myanmar “unconscionable,” the site announced.

“Everyone in the industry was looking forward to tourism being so great this year,” says May Myat Mon Win, general manager at the Chatrium Hotel in Yangon. “Unfortunately, then came the Rakhine situation. We could have done much better.”

Worries Over the Garment Trade

Last October the European Union announced it would start a six-month review process of more sanctions: removing the country of tariff-free access to the world’s largest trading bloc. The sanctions could devastate Myanmar’s textile sector by putting as many as 450,000 garment workers out of work within four years, the European chamber of commerce, Eurocham Myanmar, said in a statement.

“A withdrawal will not only risk a slowdown or even a stop of current capacity building activities (in the garment industry), but most likely close the potential for new interventions,” says Filip Lauwerysen, executive director at Eurocham Myanmar and secretary general of the European Business Organizations Network. Currently, 47 percent of Myanmar’s garment exports are bound for the European Union, according to EuroCham Myanmar.

Lauwerysen says it is now virtually impossible to sell Myanmar as an investment destination. “The brand capital of Myanmar has been completely wiped off.”

Citing Myanmar’s worsening global trade relationships and the lingering impact of the Rohingya crisis, the World Bank last year downgraded overall economic growth half a percentage point to 6.2 percent for this fiscal year. Consulting firm Fitch Solutions Macro Research, meanwhile, is revising downward its expectation for construction growth this year, from 18.5 percent to 10.3 percent for the same reasons.

The loss in interest from Western investors comes as a blow to the large majority of the population who still do not have access to basic services like banking or electricity.

“In particular it’s Western investment – the sort of investment we were really optimistic about like … law firms, banks, financial institutions, customer services firms, McDonald’s and Starbucks. A lot of those have not come,” says Sean Turnell, special economic consultant to Aung San Suu Kyi.

In a bid to replace lost foreign investment from the West, Myanmar is turning to countries such as China to fill the void. In October, Reuters reported that Myanmar signed an agreement with China’s state-run investment firm CITIC Group to begin work on a $1.3 billion deep-sea port in Rakhine State. Myanmar has also pledged to push forward the building of the China-Myanmar economic corridor under China’s One Belt, One Road Initiative.

“Overall, we are now receiving some investment from ASEAN countries, especially China and South Korea,” says Hanta Myint. “China in particular is trying to move into the country and now they are sending their scouts here.”

Officials from the government did not respond to several interview requests, but the strategy is similar to what the country used when ruled by the junta – selling natural resources to China to lessen the impact of Western economic sanctions imposed for years of rights abuses.

With fewer Western investors coming to Myanmar, the private sector also is turning to regional neighbors, says May Myat Mon Win of Chatrium Hotel, who also is vice chairman of the Myanmar Tourism Federation.

“Tourism is practicing a ‘Look East’ policy to remedy the situation in the short term. We are trying to attract regional customers and regional travelers are increasing.”