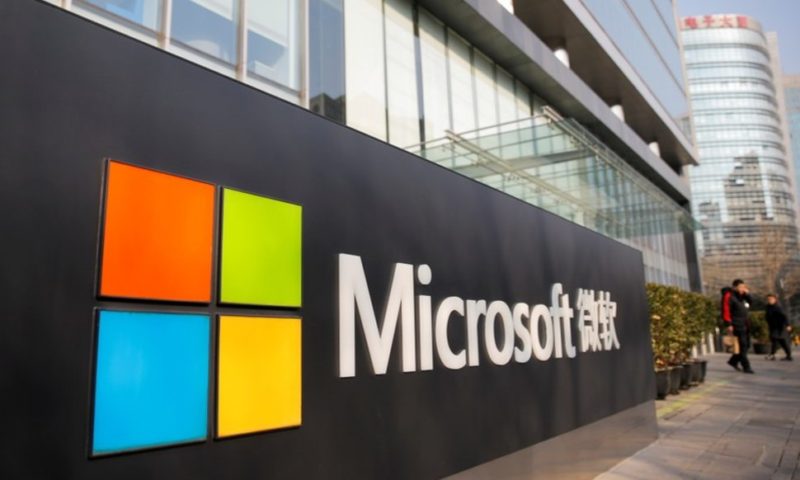 Shares of Microsoft, one of the most valuable U.S. technology companies, fell 3 percent in extended trade even though earnings per share slightly beat analysts’ estimates. The stock had closed 3.3 percent higher in a broad tech rally.

Azure, Microsoft’s flagship cloud product, had revenue growth of 76 percent in the fiscal second quarter ended Dec. 31, down from a 98 percent surge a year earlier. Azure sales increased 76 percent in the September quarter as well.

Long known for its Windows software, Microsoft has shifted its focus to the fledgling cloud market where it is battling Amazon.com Inc for dominance.

The company is rapidly picking up business from the retail industry in particular, which is aiming to keep pace with the e-commerce business of Amazon. This month alone, Microsoft announced deals with Walgreens Boots Alliance Inc and Kroger Co, on top of a five-year agreement with Walmart Inc it unveiled this summer.

“Our strong commercial cloud results reflect our deep and growing partnerships with leading companies in every industry including retail, financial services, and healthcare,” Microsoft Chief Executive Satya Nadella said in a statement.

But Wall Street has grown accustomed to blockbuster earnings beats as companies around the globe ditch their own data centers for the cloud.

Microsoft forecast revenue of between $29.4 billion and $30.1 billion in the current quarter. Analysts were expecting $29.9 billion, according to IBES data from Refinitiv.

The company also said a stronger U.S. dollar would hit growth of its intelligent cloud business segment, which includes Azure and other products, by 2 percentage points.

Microsoft has long courted customers outside the United States and has a 17 percent share of the global cloud market, research firm Canalys previously said. Amazon has 32 percent.

Microsoft is spending more on the latest cloud technologies to narrow the gap. Research and development expenses rose to $4.1 billion in the quarter from $3.5 billion a year earlier.

“Clearly the company is spending aggressively to double down on its cloud bet, a dynamic that is a smart move but caps margin upside in the quarter,” said Daniel Ives, an analyst at Wedbush Securities.

Microsoft’s total revenue climbed 12.3 percent to $32.47 billion. Wall Street analysts on average had expected revenue of $32.51 billion, according to IBES data from Refinitiv.

Revenue from Microsoft’s productivity software unit climbed 13 percent to $10.1 billion, powered by double-digit revenue growth for LinkedIn and Office 365. Wall Street analysts on average had expected revenue of $10.09 billion, according to IBES data from Refinitiv.

Microsoft reported a profit of $8.42 billion. Excluding one-time items, it earned $1.10 per share, edging past analysts’ estimates of $1.09 per share.