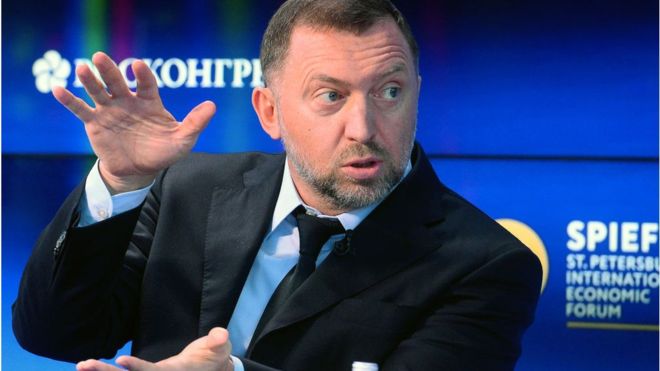 The oligarch has been linked to the probe into alleged Russian interference in US elections, and Democrats wanted the sanctions to continue.

But the Treasury Department said curbs on oligarch himself remained in force.

The companies were blacklisted last April when the Trump administration targeted people and businesses it said had profited from a Russian state engaged in “malign activities” around the world.

That included Russia’s alleged meddling in the 2016 US presidential election, as well as international cyber attacks.

But earlier this month, Republicans in the US Senate blocked an effort to continue the sanctions against Rusal, the world’s second largest aluminium firm and other Deripaska-linked firms.

They and the Trump administration argued the curbs could have an impact on the global aluminium industry. They also said Mr Deripaska had lowered his stakes in the firms so that he no longer controlled them, a sign the sanctions were working.

There has been pressure on the Trump administration by business groups to lift the sanctions on these three firms. That’s because the announcement of the sanctions in April led global aluminium prices to briefly spike, as Rusal is one of the world’s biggest suppliers.

But when the Treasury Department signalled its intentions in December, US politicians cried foul. They wanted the Trump administration to wait until a special investigation into Russia’s interference into the 2016 US Presidential election had finished.

Earlier in January, in a significant break, 136 members of President Trump’s Republican Party voted with House Democrats on a measure to oppose the lifting of sanctions. Although it was a largely symbolic vote – a similar measure the day before failed to get the necessary 60 votes to pass in the Senate – the large number of party defections was notable.

While the Treasury Department has insisted that the three firms have agreed to stringent new reporting requirements and that the Russian oligarch at the centre of the dispute, Oleg Deripaska, has significantly lowered his ownership stake, the lifting of sanctions less than a year after they were imposed is sure to once more raise questions about the Trump administration’s commitment to punishing Russia for meddling in the 2016 election.

In a statement on Sunday, the US Treasury Department said the three companies had also agreed to “extensive, ongoing auditing” to ensure they had no ties with the Russian billionaire.

And Power company EN+, in which Mr Deripaska owned a controlling stake, welcomed the news from Washington. The London-listed company’s shares plummeted when sanctions were announced last April have not recovered.

The firm’s chairman, Lord Barker of Battle said: “This is the first time independent directors of a London listed Russian company, with the strong support of minority shareholders, have successfully removed control from a majority shareholder as a direct response to US sanctions policy.”

But lawmakers across the political spectrum have said it is inappropriate to ease sanctions on companies tied to the oligarch while Special Counsel Robert Mueller investigates whether Mr Trump’s 2016 presidential campaign colluded with Moscow.

Mr Deripaska, 51, has been a recurring figure in the investigation and has ties to President Donald Trump’s former campaign chairman Paul Manafort, who pleaded guilty in September 2018 to attempted witness tampering and conspiring against the United States.

Last week Belarussian model Nastya Rybka was briefly detained by Russian police, having claimed to have evidence of Russian interference in the election campaign obtained from Mr Deripaska.

Mr Deripaska has denied the allegations and successfully sued her.

President Trump denies collusion, and Moscow has denied seeking to influence the US election on Mr Trump’s behalf, despite US intelligence agencies’ finding that it did so.