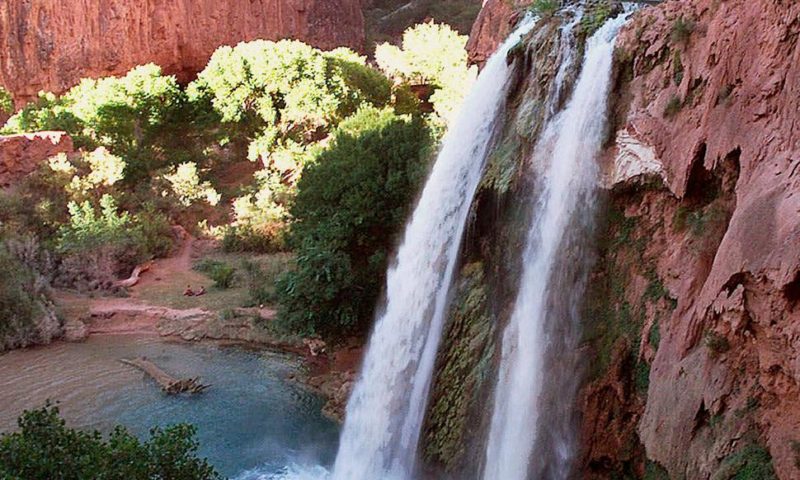 The Arizona tribe known for its blue-green waterfalls won’t allow visitors to book through a tour company this year.

FLAGSTAFF, Ariz. — The thousands of tourists who travel to a remote Native American reservation deep in the Grand Canyon each year to camp near a series of picturesque, blue-green waterfalls will have to do so without the benefit of professional guides.

The Havasupai Tribe has decided not to allow outfitters to escort visitors this year down the long, winding path that leads to its small, roadless reservation and on to its main tourist draw: towering waterfalls that cascade into swimming holes that are warm year-round.

Tourists can visit the waterfalls, either by reserving a room at the tribe’s only lodge or by snapping up a coveted permit for one of its hundreds of camping spots scattered amid a creek. But starting in February, they’ll have to find their own way to the reservation’s waterfalls and caves, and carry their own food and gear.

Abbie Fink, a spokeswoman for the Havasupai Tribe, said the Tribal Council’s decision isn’t a reflection on the outfitters. Rather, she said the tribe wanted to manage all tourist traffic itself.

“It’s not solving a problem. It’s returning the enterprise to the control of the tribe,” she told The Associated Press.

For years, the tribe has set aside spots for tour companies, which often bought permits in bulk. The outfitters paid a licensing fee of several thousand dollars, and some had elaborate setups with gourmet meals, inflatable couches and massage therapists. Most brought just the essentials.

Fink couldn’t say exactly how much tour guides paid or how many licenses have been issued in the past. She said the Tribal Council would re-evaluate outfitter licenses for 2020.

The tribe relies heavily on tourism and estimates that between February and November, it gets 30,000 to 40,000 visitors per year to its reservation deep in a gorge west of Grand Canyon National Park that’s accessible only by foot or helicopter, or by riding a horse or mule. The tribe does maintenance in the campground and on the trails in December and January.

The tribe doesn’t allow day hikes, so visitors wanting to take in its waterfalls and other sights must reserve overnight trips in the campground or at the sole lodge.

Rooms in the lodge, which can be booked only by phone, are sold out for the rest of this year. Reservations for 2020 start June 1.

Permits for 2019 camping spots become available online Feb. 1 and are expected to sell out in minutes. People on social media have been strategizing for months about how to boost their chances, including by setting up an account early, recruiting friends and family to try to book a trip and repeatedly refreshing multiple internet browsers.

The permits are $100 per person per night Monday through Thursday, and $125 a night Friday through Sunday, slight increases over last year. The tribe grants about 300 camping permits a day, Fink has said.

Adam Henry, co-owner of Discovery Treks, books between 100 and 200 people on the Havasupai trip each year but has had to stick to offering trips in other spots of the Grand Canyon. He says that’s not always welcome news for tourists intent on venturing to the waterfalls.

The hike takes tourists 8 miles (13 kilometers) down a winding trail through desert landscape before they reach the first waterfall. Then comes the village of Supai, where 600 tribal members live year-round. Another 2 miles (3 kilometers) down the trail is the campground with waterfalls on both ends.

“The blue-green water is what people want to see,” Henry said. “It’s certainly a significant bummer for people who aren’t going to be able to get out there on their own.”

Christine Miller, who works with the tour guide company Wildland Trekking, said tourists can find packing lists online and videos on Havasupai to help plan their trip. The advantage to having a tour guide is knowing how to reach the sights off the main trail, including other waterfalls, caves and swimming pools.

“There are not really any good maps out there to tell you when to cross, when not to cross” the creek, she said.

The tribe temporarily suspended licenses for outfitters in 2016 in part to review the impact that supplies loaded onto pack animals had on the animals and the trail. Fink did not respond to questions about what came out of that review.

Germany agrees to end reliance on coal stations by 2038