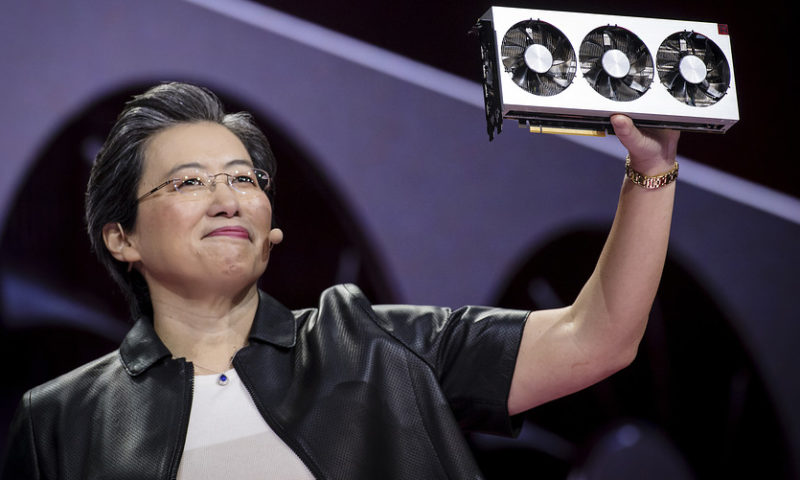 Advanced Micro Devices Inc. needs graphics card sales to be meaningful for an earnings surprise, but many analysts expect blockchain-related inventory problems to persist as the chip maker ramps up for its new line of products.

AMD AMD, +5.18% is scheduled to report fourth-quarter earnings after the market closes on Tuesday. In the last earnings report, Chief Executive Lisa Su said she expected data-center GPU sales to be a “meaningful contribution” to fourth-quarter sales, but added “it might take a couple quarters to completely get back to a normal channel” after a sudden drop-off in crypto-mining-related sales that also struck rival Nvidia Corp. NVDA, +1.46%

AMD estimated revenue of $1.4 billion to $1.5 billion for the fourth quarter, while analysts had forecast revenue of $1.6 billion before the report. The weak graphics sales and short forecast led to huge losses for AMD after that report in October.

AMD has mostly recovered from that October plunge by focusing on the future. Most recently at the CES confab in Las Vegas, Su used her keynote to throw down a gantlet challenging Intel Corp. INTC, -5.47% and Nvidia for chip supremacy in PCs, servers and gaming.

Lately, Intel Corp.’s INTC, -5.47% pain has been AMD’s gain, as AMD is thought to be poised to take a technological edge over Intel this year for the first time in a decade with its 7-nanometer chip-making process. On Thursday, Intel reported a revenue miss and a weaker-than-expected outlook for the first quarter.

Earnings: Of the 29 analysts surveyed by FactSet, AMD on average is expected to post adjusted earnings of 8 cents a share, same as the year-ago period and down from the 10 cents a share expected at the beginning of the quarter. Estimize, a software platform that uses crowdsourcing from hedge-fund executives, brokerages, buy-side analysts and others, calls for earnings of 10 cents a share.

Stock movement: While AMD shares have mostly recovered from their plummet after the company’s previous earnings report in late October, they are still down about 4% from their level prior to those earnings. By Christmas, shares had dropped 30%, and from that recent low point have rebounded 37% to close Friday at $21.93. In comparison, the Dow Jones Industrial Average DJIA, +0.75%  is up 0.6% since late October, the S&P 500 SPX, +0.85%  is up 0.4%, the tech-heavy Nasdaq Composite Index COMP, +1.29%  has advanced 0.8%, and the PHLX Semiconductor Index SOX, +2.17%  has rallied 12%.

Cowen analyst Matthew Ramsay, who has a buy rating and a $26 price target, also expects lingering effects of inventory problems.

“Following a messy 3Q that saw a material impact from near-term GPU channel sell-in challenges, we believe inventory impacts could linger to start the year, and model 1Q19 slightly below consensus,” Ramsay said.

“Despite what could be another messy quarter in GPUs, our bullish thesis remains fully intact. We continue to see AMD well-positioned for sustainable x86 PC and server CPU share gains vs. Intel as the company approaches a time period where it will have a manufacturing advantage against Intel for the first time in a decade,” Ramsay added.

Bernstein analyst Stacy Rasgon, who has a hold rating and a $16 price target, takes more of a wait-and-see approach to Tuesday’s report.

“We are somewhat torn; while we do not expect significant gaming GPU recovery, Ryzen CPU products appear to be ramping well, and weak near-term guidance is masking decent strength in new growth products,” Rasgon said. “But we remain unsure about what investors should pay for what remains essentially a show-me story.”

Apple earnings: Where does Apple go from here?