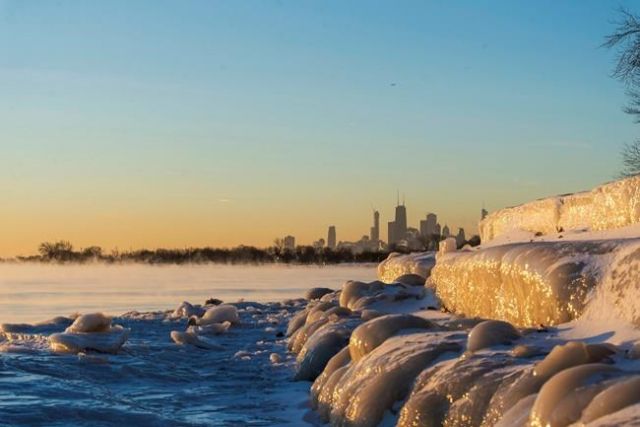 An arctic blast spread painful cold across the Midwest on Friday, closing schools, opening warming centres and even intimidating ice fishermen in a taste of the even more dangerous weather expected next week.

Forecasters called it a replay of the “polar vortex” that bludgeoned the U.S. in 2014 — and maybe even colder, with wind chills by midweek as much as 45 below in Chicago.

“We’re going to be feeling it big time,” Jeff Masters, meteorology director at the private Weather Underground, said. “It’s going to be the coldest air in five years.”

For much of middle America, the leading edge was bad enough. Cold weather advisories were in effect Friday from North Dakota to Ohio, with dangerously cold wind chills that could dip to as low as 45 below zero (-42 C) in northern Wisconsin and Minnesota and to 35 below (-37 C) in parts of northern Illinois and Iowa.

When the polar vortex plunges into the U.S., it will be warmer in parts of the Arctic — Greenland, northern Canada and Alaska — than in Chicago and Minneapolis, meteorologists said.

Schools in Milwaukee cancelled classes Friday, when the expected high was just 2 (-17 C). So did schools in western Michigan, eastern Iowa and northern Illinois. In northern Michigan, residents of islands in the river connecting Lake Superior and Lake Huron were warned to stock up on supplies in case ferry service was cut off. In Chicago, warming centres opened.