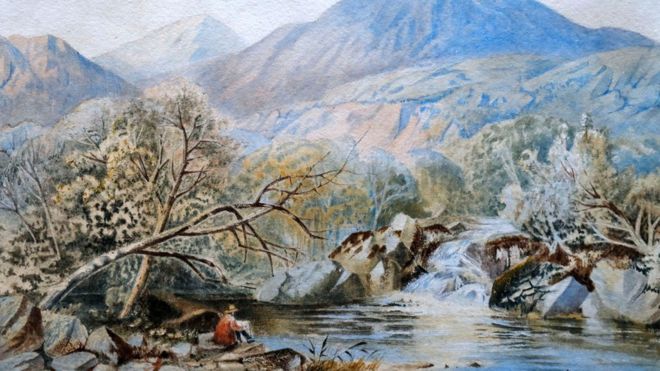 The works were up for sale at the Kloss auction house in Berlin, but taken on suspicions of forgery, police say.

The separate works depict a mountain scene, a river and a distant figure sitting beneath a tree.

They were created in the early 20th Century while Hitler, later guilty of some of the worst crimes in history, worked as a painter in Munich.

Berlin police tweeted that they had opened an enquiry into “attempted fraud” and “falsification of documents”.

The starting price for each painting was €4,000 ($4,500), according to AFP news agency. All the watercolours carried a seal of authenticity given by an expert.

A police spokeswoman, Patricia Brämer, told the BBC that investigators were looking into whether their authenticity had been “faked”.

No arrests have been made.

No-one from Kloss auction house was immediately available for comment.

The paintings’ elderly sellers reportedly did not want to be identified.

“If you walk down the Seine and see 100 artists, 80 will be better than this,” Heinz-Joachim Maeder, a spokesperson for the Kloss auction house in Berlin, earlier told Reuters.

“The value of these objects and the media interest is because of the name at the bottom,” he added.

Strong demand had been expected from online bidders in the UK, Scandinavia, the US and Russia.

Prior to World War One, in which he fought, Hitler worked in Vienna as a casual labourer and an artist, drawing postcards and paintings.

He was twice rejected from the Vienna Academy of Fine Arts.

In his book Mein Kampf, he claimed to have produced as many as three paintings a day.

In Germany, it is legal to sell paintings by Hitler so long as they do not contain Nazi symbols.

While in power, Hitler allegedly ordered the collection and destruction of his artworks, but several hundred are known to still exist.

Many are held by the US Army, which confiscated them at the end of World War Two. The collection has never been exhibited.

Others are held in the private collections of individuals and institutions. One of the largest is housed at the International Museum of World War II in the US.

In 2014, a watercolour of a registry office in Munich sold for €130,000 ($148,000) at an auction in Nuremberg, southern Germany. The picture came with a bill of sale and a signed letter by Nazi military commander Albert Bormann.

Others have been auctioned for lower amounts. Mullock’s of Shropshire sold a collection of 13 artworks in 2009 for €130,000. All were signed: A. Hitler.