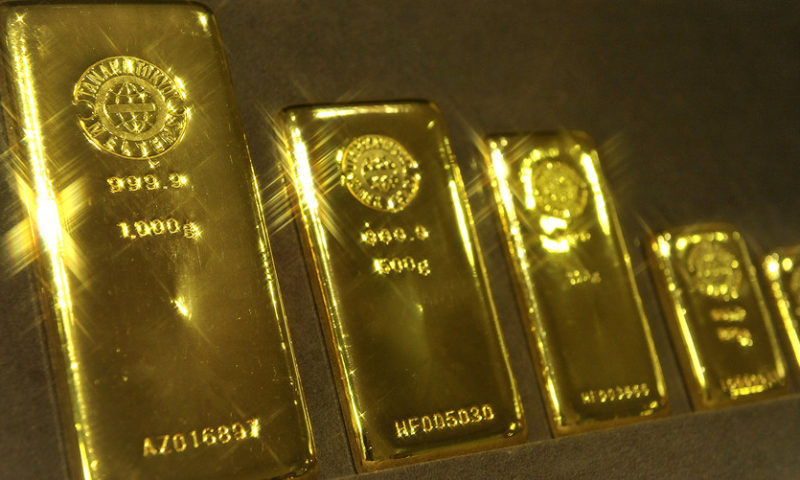 Most other metals on Comex settle with a gain

Gold prices ended slightly higher on Wednesday as weakness in the leading dollar index offered support, but some strength in U.S. equities kept a lid on gains for the precious metal.

A mixed picture on the economic outlook and major global issues, including trade and Brexit uncertainty, has also contributed to recent gains for the haven metal.

A weaker dollar can be a positive for commodities priced in the currency, making them less expensive to users of other currencies. The ICE U.S. Dollar Index DXY, +0.06% was down 0.2% at 96.098. Part of the dollar’s weakness Wednesday was due to interest in riskier currencies after their recent slide.

U.S. stocks, however, were mixed as gold futures settled Wednesday, with the Dow Jones Industrial Average DJIA, +0.70% getting a boost from a round of upbeat earnings from corporate heavyweights and drawing attention away from gold. Other stock averages were in the red.

Still, there is basically “no shortage of shocking waves which are making the headlines and these elements are supporting the price of gold. Moreover, the overall credit situation in the world is a matter of concern as well and this has increased the demand of physical gold in the eyes of some central banks,” said Naeem Aslam, chief market analyst with Think Markets UK, noting in particular a reported 22% increase in gold buying by Russia in late 2018 compared with the previous year.

“If the physical demand continues to increase at this pace, it would support the gold price even (more) strongly,” Aslam said.

Gold futures gained Tuesday with tensions on the rise following reports that the U.S. canceled a meeting with China officials as the two nations attempt to reach a resolution to a trade dispute that has hurt the global economic outlook. U.S. officials canceled preparatory trade talks this week with two Chinese vice ministers, ahead of a higher-level meeting in Washington later this month, according to a Financial Times report. The countries face a March 1 deadline to reach an agreement on trade. White House economic adviser Larry Kudlow later denied that a meeting had been canceled.

Gold was supported this week by a report from the International Monetary Fund on Monday which cut the forecast for world economic growth this year.

And, uncertainty around Brexit timing also has supported interest in haven metals ahead of next week’s vote on Prime Minister Theresa May’s alternative deal. Former Chancellor of the Exchequer George Osborne — a remainer — told the BBC that he believed a Brexit delay was most likely, while current U.K. trade secretary Liam Fox — a leaver — said that delaying Brexit would be worse than getting no deal.

This rally is a symptom of a bear market, not a bull market