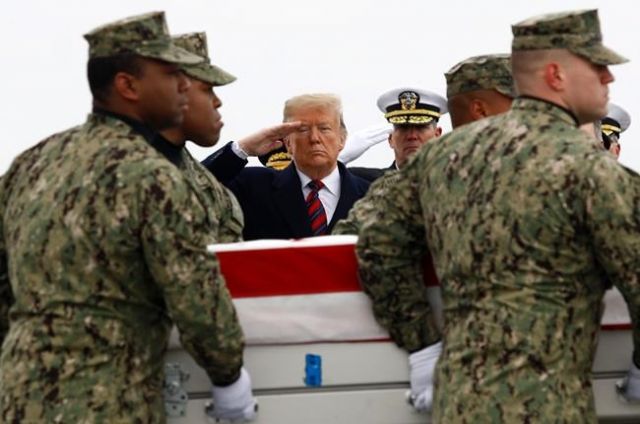 A solemn procession. A long salute. A chaplain’s prayer.

President Donald Trump travelled to Delaware’s Dover Air Force Base on Saturday to pay his respects to the returning remains of four Americans who were killed this week in a suicide bomb attack in Syria.

The bombing, which was the deadliest assault on U.S. troops in Syria since American forces moved into the country in 2015, came as Trump prepares to pull U.S. troops out of Syria. And it underscored the threat still posed by Islamic State militants, even as Trump has claimed the group’s defeat.

The president stood solemnly and saluted the remains of civilian Scott A. Wirtz of St. Louis, Missouri, as his body was carried from a C-17 military aircraft into a waiting van on a bitterly cold, wind-whipped tarmac.

Earlier, he, Secretary of State Mike Pompeo and acting Secretary of Defence Patrick Shanahan accompanied a small group of Army and Navy officers as they walked up the plane’s cargo ramp, where a chaplain said a prayer.

Wirtz and the three other Americans — Army Chief Warrant Officer 2 Jonathan R. Farmer, Navy Chief Cryptologic Technician (Interpretive) Shannon M. Kent and an unnamed civilian contractor — were killed in a suicide bombing Wednesday in the northern Syrian town of Manbij. Wirtz had been assigned to the Defence Intelligence Agency as an operations support specialist.

The three other transfers were conducted privately, with the president observing. He also spent time with the families of those killed.

Trump told reporters as he left the White House on Saturday that meeting the relatives of the country’s fallen heroes “might be the toughest thing” he has to do as president. In discussing his withdrawal decision, Trump has repeatedly referenced how much he dislikes making calls and writing letters to the families of those killed while serving overseas.

The trip was not listed on the president’s public schedule that was released Friday night, but he tweeted the news in the morning.

“Will be leaving for Dover to be with the families of 4 very special people who lost their lives in service to our Country!” he wrote.

The visit came during a budget fight that has consumed Washington for the past month, shuttering parts of the federal government and leaving hundreds of thousands of workers without pay. Raising the stakes in his dispute with House Speaker Nancy Pelosi, D-Calif., the president on Thursday abruptly cancelled her military flight, hours before she and a congressional delegation were to depart for Afghanistan on a previously undisclosed visit to U.S. troops.

Trump delivered a speech later Saturday in which he offered to extend temporary protections for young people brought to the U.S. illegally as children in exchange for billions for his long-stalled border wall. But while Trump cast the move as a “common-sense compromise,” Democrats were quick to dismiss it at a “non-starter.”

Trump has made one other visit to Dover during his presidency, soon after taking office. On Feb. 1, 2017, Trump honoured the returning remains of a U.S. Navy SEAL killed in a raid in Yemen. Chief Special Warfare Operator William “Ryan” Owens, a 36-year-old from Peoria, Illinois, was the first known U.S. combat casualty of Trump’s presidency.

In a Dec. 19 tweet announcing the withdrawal from Syria, Trump declared, “We have defeated ISIS in Syria, my only reason for being there during the Trump Presidency.” He said the troops would begin coming home “now.” That plan triggered immediate pushback from military leaders and led to the resignation of Defence Secretary Jim Mattis.

Over the past month, Trump and others have appeared to adjust the timeline, and U.S. officials have suggested it will likely take several months to safely withdraw the approximately 2,000 U.S. troops from Syria.

A leading U.S. voice on foreign policy and close ally of the president, Sen. Lindsey Graham, said during a visit Saturday to Turkey that an American withdrawal from Syria that had not been thought through would lead to “chaos” and “an Iraq on steroids.” Graham, R-S.C., urged Trump not to get out without a plan and said the goal of destroying Islamic State militants in Syria had not yet been accomplished.

The Islamic State group claimed responsibility for Wednesday’s attack in Manbij, which killed 19 people, including the four Americans.

Trump said before arriving in Dover that IS has lost almost all its territory but “that doesn’t mean you’re not going to have somebody around.” He also said “we can be pulling back but we’ve been hitting ISIS very hard over the last three weeks … and it’s moving along very well.”

Manbij is the main town on the westernmost edge of Syrian territory held by the U.S.-backed Syrian Kurds, running along the border with Turkey. Mixed Kurdish-Arab Syrian forces liberated Manbij from IS in 2016 with help from the U.S.-led coalition.

But Kurdish control of the town infuriated Turkey, which views the main U.S. Kurdish ally, the YPG militia, as “terrorists” linked to Kurdish insurgents on its own soil.

Trump reinforced his withdrawal decision during a meeting with about a half-dozen GOP senators late Wednesday at the White House.

Sen. Rand Paul of Kentucky, who was at the meeting, told reporters on a conference call that the president remained “steadfast” in his decision not to stay in Syria, or Afghanistan, “forever.” But the senator did not disclose the latest thinking on the withdrawal timeline.

Paul said Trump told the group, “We’re not going to continue the way we’ve done it.”

2018 Was The Hottest Year for Oceans, Study Says