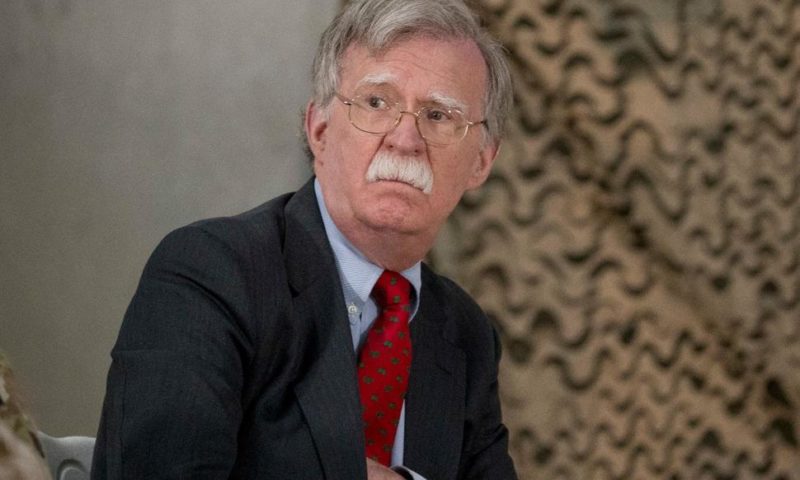 Capitalizing on a social media trend sweeping Facebook in which users, in general, compare pictures from the present day to 10 years prior, Zarif tweeted a screenshot of a 2009 op-ed in which Bolton advocated for Israel’s striking Iran next to one of a report from earlier this week that the top adviser to President Donald Trump had queried the Pentagon about similar attack plans.

Bolton and the Trump administration’s hard line against Iran has been a favorite topic of the foreign minister’s in recent weeks. Earlier in January, he tweeted that Bolton and Secretary of State Mike Pompeo’s “pure obsession with Iran is more and more like the behavior of persistently failing psychotic stalkers. In effect, U.S. is substituting a real foreign policy with Iran- obsession and -phobia.”

The day before, Zarif tweeted a picture of Bolton wearing virtual reality or “VR” glasses during a recent trip to Israel, adding, “In the valley of the blind, even those with VR glasses are still blind.”

The Trump administration has made containing Iran a central tenet of its foreign policy, chiefly in undoing the 2015 agreement brokered by his predecessor, President Barack Obama, limiting Tehran’s nuclear ambitions. European and Asian allies have expressed concern at new sanctions Trump has imposed against Iran, limiting their ability to buy Iranian oil.

Bolton’s reported inquiries about American attack plans have raised concern that the influential adviser is clearing a path toward opening up a new U.S. war zone in the Middle East. Others argue that Iranian officials only respond to a comparably tough approach.

“The tough talk and the tough actions have had an impact in Tehran,” Council on Foreign Relations Senior Fellow Ray Takeyh wrote in an op-ed in Politico this week, adding that Bolton “seems to appreciate that threats work better than soothing words in tempering a theocratic regime destined for the ash heap of history.”