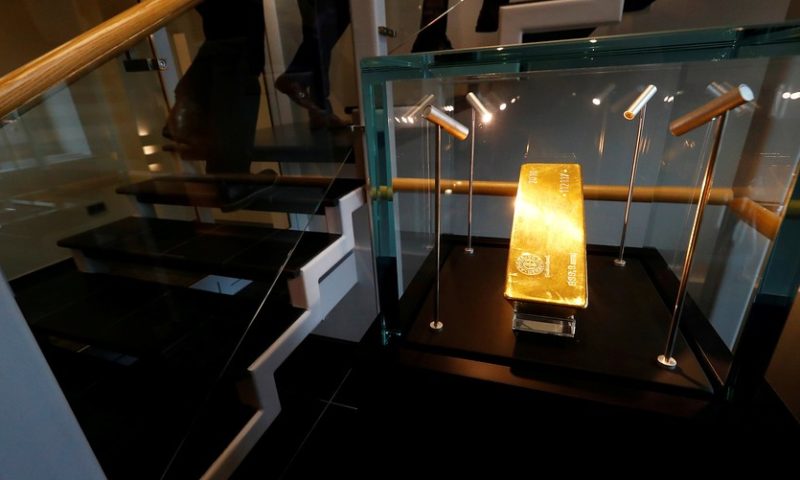 Gold futures prices dropped Friday to log their first weekly loss since mid-December, as investors pushed into riskier assets, including stocks, fueled by hope of potential progress toward a resolution in the U.S.-China trade dispute.

“The gold price is moving lower today as [risk-on] investors are optimistic about the U.S.-China trade deal despite the fact the Treasury has denied all the recent rumors. But the fact is that Washington and Beijing want to make the deal now and it appears that they have understood the consequences of this turmoil,” said Naeem Aslam, chief market analyst with Think Markets.

“However, investors should not take their eyes off from the Brexit chaos, because we have no idea yet which way we are heading and this has impacted the growth in the U.K. and in Europe,” he added.

“There is just one word to describe today’s gold price fall: fatigue,” said Chintan Karnani, chief market analyst at Insignia Consultants. He said an inability of spot gold to break and trade over $1,300, may be the root of the pullback. “There were all kinds of very high positive news for gold, but spot gold did not break past $1,300.”

Karnani believes that investors are “focused on political news and ignoring fundamentals and economic news,” and said that the “global trade war is not yet over.”

Investors were also increasingly wary that a U.S. partial government shutdown, in its 28th day, could deliver a more lasting impact to economic growth in the first quarter, although reaction in markets has been so far subdued.

Aslam was eyeing support at $1,268, a level for gold that he says could be punctured to the downside once more concrete news on trade emerges.

The U.S. stock market will be closed Monday for Martin Luther King Jr. Day. Trading for commodities including crude oil CLG9, +3.25% and gold, among other contracts listed on Globex, will all trade electronically. Trading floors CME, +1.20% are closed, so futures won’t settle. Globex trading begins as usual at 6 p.m. Eastern on Sunday and ends at 1 p.m. Eastern on Monday.

Among economic data Friday, the consumer sentiment index in January fell to a reading of 90.7 from 98.3—the worst reading since October 2016, but December industrial production rose 0.3%, in line with Wall Street expectations.

Palladium futures notched yet another record settlement Thursday—its ninth in 10 sessions. March palladium PAH9, -0.78% however, settled at $1,335.10 an ounce, down about 1% for Friday’s session. It still saw a weekly rise of 4.4%.

Bitcoin prices muted but volatility is on the rise, says Cboe analyst