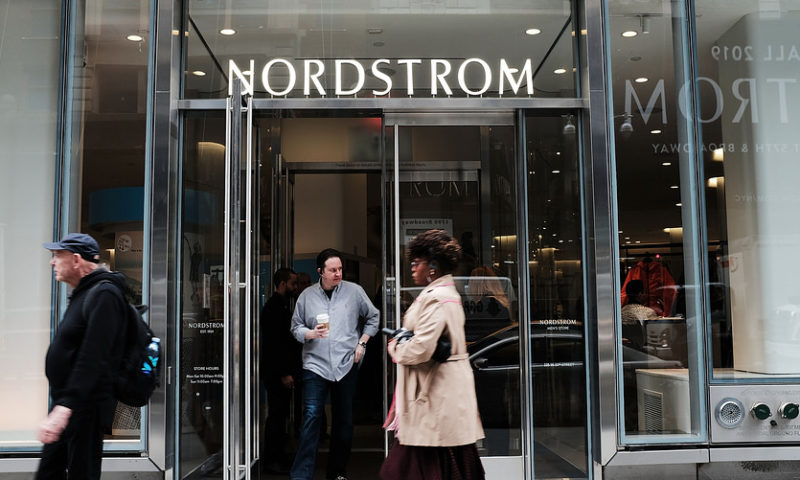 Nordstrom Inc. shares took a 4.7% tumble in Wednesday trading after the luxury department store’s holiday sales announcement disappointed and it was downgraded to neutral from buy at Goldman Sachs.

Higher holiday markdowns were taken in an effort to get inventory to an “appropriate level.” As a result, Nordstrom expects adjusted earnings to fall on the low end of the previously announced range of $3.27 to $3.37, including a nonrecurring credit-related charge of 28 cents.

FactSet is guiding for fourth-quarter earnings of $1.44 per share and full-year EPS of $3.57.

“Nordstrom’s pre-announced holiday sales confirm a marked deceleration in the full-price business,” Goldman analysts led by Alexandra Walvis said, highlighting that this is the second consecutive miss. “Weaker store traffic is concerning, particularly as it comes in a period in which the consumer is strong and where news from other mall-based retailers on traffic has been more mixed.”

The announcement comes after disappointing holiday sales results from Macy’s Inc. M, -2.00% , Kohl’s Corp. KSS, +0.30% , where same-store sales decelerated, and L Brands Inc. LB, +0.38% , where the company’s Victoria’s Secret brand struggles to get back on track.

“We believe the company’s differentiated offer of branded merchandise in an off-price format combined with a premium online shopping experience will continue to gain market share with consumers,” Goldman wrote. “That said, we believe strength in this business will be insufficient to offset investor concern regarding full-price execution in the near-term.”

“Speaking with the company, our impression is typical culprits such as weather, tourism, fashion, and operational execution were probably not issues,” analysts said.

“Perhaps we are simply witnessing another chapter in the story of consumers leaving the mall to shop online. If so, this would severely damage our buy thesis, which hinges on the idea Nordstrom’s full-price stores will serve a useful purpose in the future.”

UBS maintained its buy rating in its Wednesday note, with a $66 price target.

“We continue to believe that inventory levels across the U.S. landscape have been worse than they appeared, with the full-price channel finally catching up to the elevated levels seen at off-price over the past year,” wrote Instinet analysts led by Simeon Siegel.