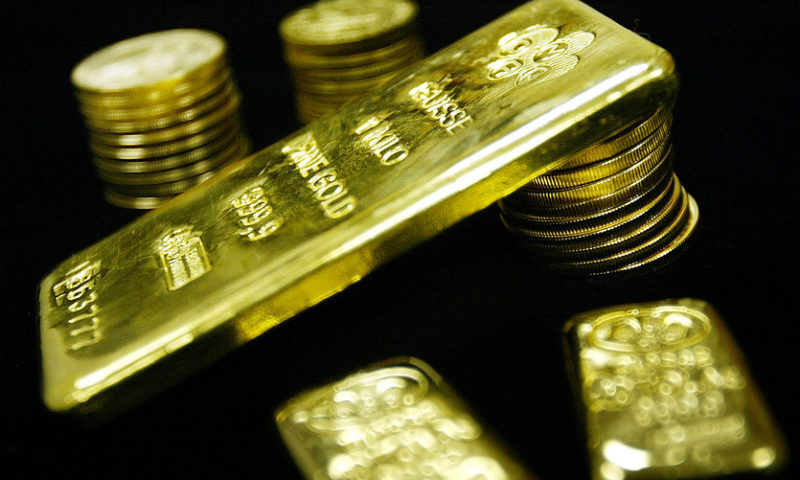 Palladium, meanwhile, snapped a 10-day stretch of gains, with futures prices failing to settle above that of gold.

The ICE U.S. Dollar index DXY, +0.02% rose 0.7% to 96.252. Strength in the buck can help undercut appetite in assets priced in dollars, like gold, among buyers using other currencies.

On the data front, the producer-price index, a measure of the prices businesses receive for their goods and services, fell a seasonally adjusted 0.2% in December, the Labor Department said. Separately, the Empire State manufacturing index fell 7.6 points to 3.9 in January, the lowest reading in more than a year, the New York Federal Reserve said Tuesday. Economists had expected the index to inch up to 12, according to a survey by Econoday.

Kansas City Fed President Esther George, a strong proponent of raising interest rates, said Tuesday now “might be a good time to pause” in the rate hike cycle to allow the Fed to get its bearings. A slowdown in the pace of rate hikes would help support gold, which tends to benefit from looser monetary policy.

U.S. stocks were higher as gold futures settled, buoyed by news of new stimulus measures out of China, though the market also saw weaker-than-expected quarterly results from the likes of financial bellwethers JPMorgan Chase & Co. JPM, +0.73% and Wells Fargo WFC, -1.55%

In Europe, disappointing German economic reports come as investors in the region focus on a closely followed U.K. parliamentary vote on Prime Minister Theresa May’s Brexit deal, scheduled for later Tuesday, which could rattle markets. A partial government shutdown that was entering a 25th day in the U.S. also was on investors’ radar.

“Political uncertainty in the United States and the eventual fate of the Brexit vote will keep gold bid as investors look for a safe haven,” wrote Alfonso Esparza, senior market analyst at Oanda, on Tuesday in a research note.

In other Comex dealings, palladium’s March contract PAH9, +0.60% turned lower Tuesday, giving up earlier gains after 10 consecutive sessions of gains and seven straight record settlements. The contract fell 0.4% to settle at $1,277.10 an ounce—ending roughly $11 below the per-ounce price of gold.

Palladium futures haven’t settled above gold futures since October 2002, according to Dow Jones Market Data. Based on spot prices, however, palladium surpassed gold in December for the first time in more than 16 years. Tight supplies and strong demand have helped to support palladium.

“Palladium has been in a supply deficit for several years and so is it set to remain in 2019,” wrote Frederic Panizzutti, a managing director at trading services group MKS PAMP Group, in a note Tuesday.

“The mining output is not facing any increase. We don’t see a shift from palladium to platinum catalyst materializing over the short term,” he added, referring to palladium’s use in emission-controlling catalytic converters for gasoline-powered vehicles.

Americans lost $1.7 billion trading bitcoin in 2018 — and more than half don’t know they can claim a deduction