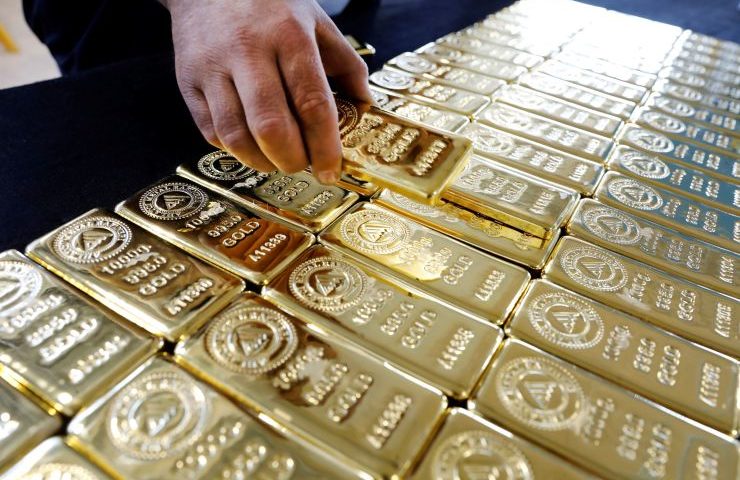 Gold eased on Tuesday as the dollar rose and stock markets climbed, but further losses were capped by concerns over slowing economic growth and prospects of a pause in U.S. interest rate hikes.

“With the equity markets coming up once again, we are seeing a lesser need for safe haven assets such as gold and yen,” said David Meger, director of metals trading at High Ridge Futures.

“As a result, we are continuing to see a slight retracement off of the psychological $1,300 resistance level.”

Also weighing on gold was a stronger greenback, which gained after weak economic data from Germany impaired the euro, making the metal more expensive for holders of other currencies.

However, lingering concerns triggered by weak economic data from across the globe raised doubts about the condition of the global economy, keeping gold’s underlying appeal intact, analysts said.

“Right now, there is a lot of insecurity about the stock markets, global economy and trade,” said Miguel Perez-Santalla, vice president of Heraeus Metal Management in New York.

“These concerns are holding gold up and one wrong move can pop gold up above the $1,300 level.”

Gold has been on a good run of form over the past few weeks, having hit its highest since mid-June on Jan. 4 at $1,298.42 an ounce, drawing support from a dovish stance from the U.S. Federal Reserve.

Fed Chair Jerome Powell earlier this month said the central bank had the potential to be patient with its monetary policy.

“We view 2019 as a year of assets rebalancing and fresh money to flow into gold,” MKS PAMP Group said in a note, forecasting bullion to average $1,335 an ounce in 2019.

Despite gold having already priced in a widely expected defeat for the British Prime Minister, uncertainty lies in what will happen after the vote, which “could generate some interest in gold” in Europe, said Philip Newman, director at Metals Focus.

“Palladium has been in a supply deficit for several years and is set to remain so in 2019,” MKS PAMP said.

Equities recover; Brexit vote is the key event of the week