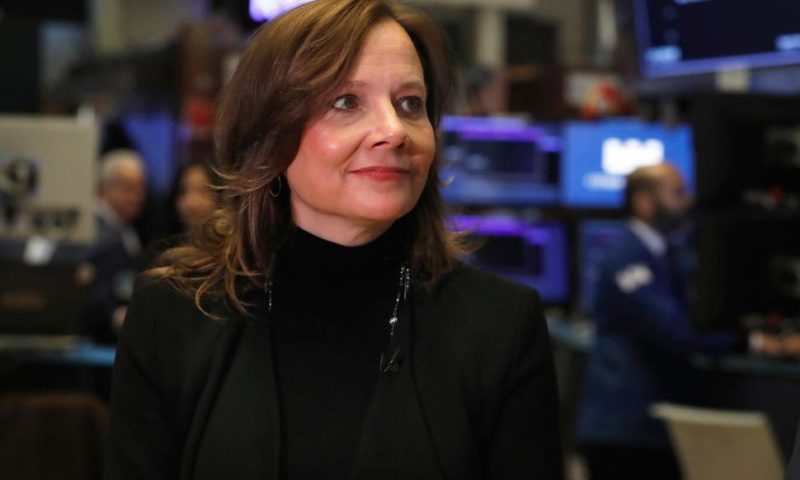 General Motors strengthened its pretax profit estimate for 2018 and predicted even stronger performance for 2019 as it executives made a presentation to investor on Friday.

DETROIT— General Motors strengthened its pretax profit estimate for 2018 and predicted even stronger performance for this year as it executives made a presentation to investors on Friday.

The rosy profit forecast comes despite declining sales for the company in the U.S. and slowing sales in China. GM also plans to exit several car lines in the U.S. in the coming year.

The outlook exceeded Wall Street’s expectations for both years. Analysts polled by FactSet expect pretax earnings of $6.24 for 2018 and they predict a decline for this year, to $5.92.

In a briefing for reporters before the presentation in New York, Barra said GM has enough new trucks and SUVs coming this year to offset any U.S. sales decline caused by scrapping car models such as the Chevrolet Cruze.

The company is rolling out new full-size pickup trucks and has heavy-duty versions coming later in the year. It also will have a full year of sales for the Cadillac XT4 and Chevrolet Blazer new SUVs, as well as new Cadillacs to be announced later, she said. “We think we have a very, very strong product portfolio this year, and we’re really looking forward to getting those vehicles, trucks crossovers in to the marketplace,” she said.

Chief Financial Officer Dhivya Suryadevara said restructuring efforts will help GM’s bottom line in 2018 by $2 billion to $2.5 billion, with a total benefit of $4.5 billion in cost savings and $1.5 billion less in capital spending by the end of 2020.

Barra said that based on current business conditions, she sees no further layoffs or plant closures through the end of 2020. “We’ve made all the announcements that we need to make. We’re continuing to transform the company,” she said.

In November, GM announced plans to shut the plants and lay off the workers, including about 3,300 at four U.S. factories that mainly make cars and components, 2,600 at a factory in Canada and over 8,000 white-collar workers. The company said the moves are necessary to stay financially healthy as it makes the transition to more electric and autonomous vehicles.

Barra said Friday that GM has 2,700 jobs at other factories for the 3,300 U.S. factory workers slated for layoff. About 1,500 workers have expressed interest in moving to other plants, and 700 already have been placed, she said. Another 1,200 are eligible to retire, she said.

GM has faced withering criticism from politicians and U.S. and Canadian unions because of the cuts. The company says it still has to negotiate possible closures in the U.S. with the United Auto Workers union.

Also, GM said it still plans to start a self-driving ride-hailing service this year in an unspecified city. Dan Ammann, the new CEO of GM’s Cruise Automation autonomous vehicle unit, said GM still plans to deploy fully autonomous vehicles without human backup drivers for the service. But he also said the system may start with vehicles that have steering wheels and other controls.

“We will not deploy until we achieve the safety thresholds that we believe we need to deploy,” Ammann said when questioned by reporters. “We’re going as quickly as we can to reach that point.”

Google’s Waymo autonomous vehicle unit had said it would carry passengers without human backups in Arizona this year, but late in the year announced that the humans would remain.

In China, GM expects sales to be flat overall, around 27 million. Even with 20 new or updated models coming in the country this year, Suryadevara predicted a small decline in profits from China.

“We view this as a smart strategic play as it will allow pricing flexibility at the higher-end which should help scale technology down to its other lines,” UBS analyst Colin Langan wrote.

The United Auto Workers union applauded the additional electric vehicles and said in a statement Friday that they should be made at U.S. factories.