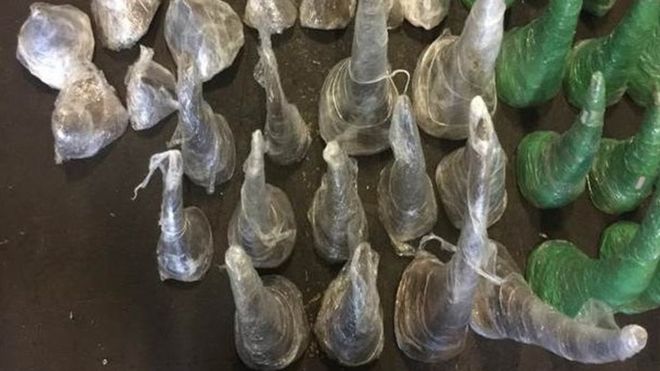 South African authorities have seized 116kg (256 lbs) of illegal rhino horn being smuggled out of the country.

The haul of 36 horns and horn fragments, worth about $1.3m (£1m), is believed to be one of the biggest seized in the country in recent years.

Customs officials at OR Tambo airport in Johannesburg say it was sniffed out by Lizzy, a detector dog.

The horns were found tightly packed inside boxes, along with everyday items such as decorations and doormats.

The eight boxes were already ready to be shipped to Dubai, the South African Revenue Service (Sars) said in a statement.

Despite concerted efforts to fight it, poaching is still a persistent issue in South Africa. Between 2007 and 2014, rhino poaching rose by about 9,000%.

Conservation groups say the number of rhinos killed has been gradually decreasing since 2014, but more than 1,000 rhinos continue to be killed in the country every year.

To get horns out of the country, and often on to lucrative markets in Asia, poachers usually smuggle them out one by one, or break them down into smaller blocks and pellets.

Sometimes the horn is ground down into a powder, so that it can be used in traditional medicines in China and Vietnam.

Sars says dogs like Lizzy – who discovered the latest shipment – are part of a nationwide initiative to fight smuggling.

The world’s oceans are warming faster than predicted