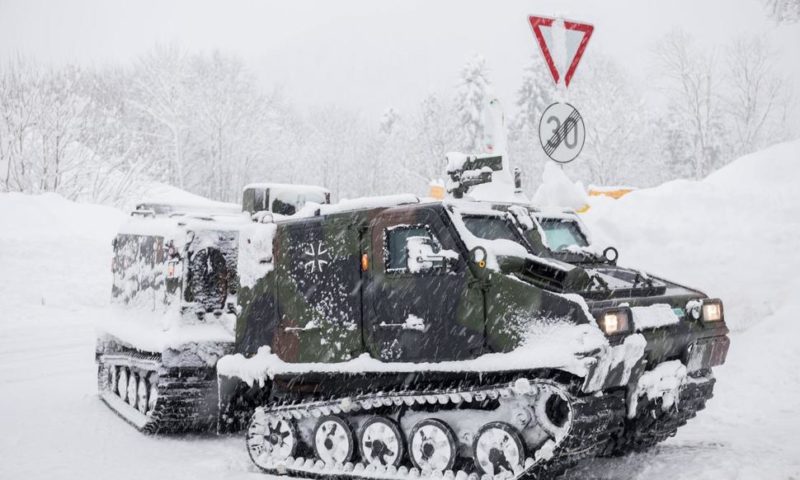 Heavy snowfall is continuing in parts of Austria and southern Germany, with several places cut off and the bad weather expected to persist.

BERLIN — HEAVY snowfall continued Thursday in parts of Austria and southern Germany, with several places cut off and the bad weather expected to persist. Snow was causing problems in other parts of Europe, even in Norway’s Arctic Svalbard archipelago.

Austrian police said that a 16-year-old boy from Australia was killed in an avalanche in St. Anton am Arlberg as he was skiing with his family on Wednesday.

In neighboring Slovakia, the mountain rescue service said a 37-year-old man was killed by an avalanche in the Mala Fatra mountains. A 7-year-old child was killed in Aying, near Munich, by a falling tree. German news agency dpa reported that police believe the tree was weighed down by snow.

That brought to at least 17 the number of weather-related deaths reported in Europe over the past week.

Several railway lines in the Alps were closed because of the snow, trucks and cars got stuck for hours on a highway in southwestern Germany and schools were closed in parts of Bavaria.

Roads into several places were closed — although Galtuer in western Austria, where a massive avalanche in 1999 killed 31 people, was reachable again on Thursday after being cut off.

The Austrian minister responsible for tourism, Elisabeth Koestinger, said that “in most skiing areas, there is no reason for concern at present if people keep to the rules and don’t leave the secured slopes.”

Austrian public broadcaster ORF reported that the weather was expected to calm on Friday but further heavy snow could be expected on Sunday.

In the Czech Republic, around 9,000 households were without electricity on Thursday after heavy snow in regions bordering Germany and Austria.

On Norway’s Arctic Svalbard islands, more than 100 people were evacuated as a precaution because of a storm and the risk of avalanches. The Svalbard archipelago is 800 kilometers (500 miles) north of Norway’s mainland.

Norwegian news agency NTB said 29 dwellings at the foot of the Sukkertoppen mountain were evacuated, and a school, kindergartens, a sports facility and public library closed. In the north of mainland Norway, authorities warned of a risk of avalanches.

The Swedish Meteorological Institute on Thursday sent out warnings for a storm and heavy snowfalls over northern Sweden.