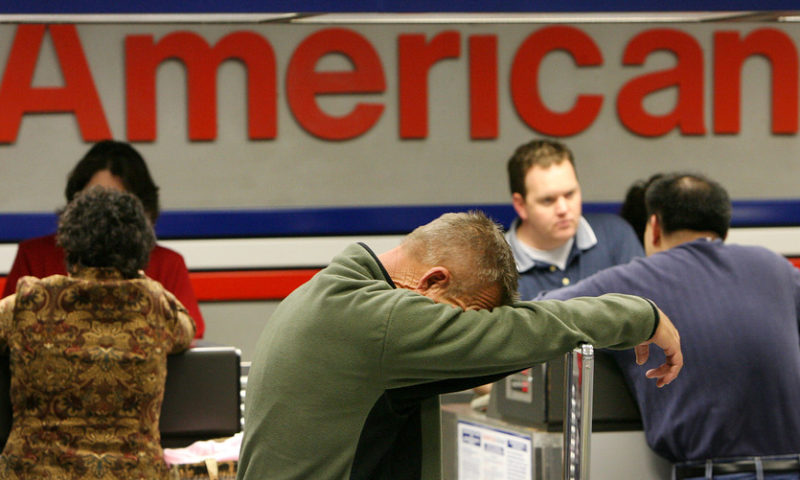 The airline sector’s weakness weighed on the broader transport sector, as the Dow Jones Transportation Average DJT, +0.43% edged up 4 points, or less than 0.1%, while the Dow Jones Industrial Average DJIA, +0.51% rose 85 points, or 0.4%.

The price declines of all the Dow transports’s airline components were shaving about 33 points combined off the index’s price.

The sector and Dow transports decliners were led by American Airlines’ stock AAL, -4.13% which slid 4.9%. American said earlier that it now expects fourth-quarter total revenue per available seat mile (TRASM) to be up about 1.5%, compared with previous guidance of up 1.5% to 3.5%.

The carrier said it expects earnings per share, excluding non-recurring items, of $4.40 to $4.60, below the FactSet consensus of $4.62.

Cowen analyst Helane Becker followed the news by reiterating her outperform rating, but trimming her stock price target to $42 from $43.

“The issue seems to be an aggressive forecast rather than any dramatic change in the pricing structure,” Becker wrote in a note to clients. “Regardless, the results were disappointing and the stock is reflecting that this morning.”

American’s disappointing outlook comes a week after Delta Air Lines Inc. DAL, +0.54% said it expects fourth-quarter TRASM to be up about 3%, compared with the projection provided last month of about 3.5% growth, and guidance provided in October of a rise of 3% to 5%. Delta’s stock shed 0.5%.

United and Delta are scheduled to report fourth-quarter earnings on Jan. 15. Southwest and Alaska Air are set to report on Jan. 24, followed by American on Jan. 25 and JetBlue on Jan. 30.

J.P. Morgan analyst Jamie Baker raised his 2019 estimates “across the board,” but he said for the “wrong reasons” of cheaper fuel and softer unit revenue.

“We remain of the view that airline stocks are likely to de-rate should the market prove dissatisfied with TRASM, even if earnings rise. Such was the case in 2015/2016,” Baker wrote in a note to clients. As a result, he shaved his year-end 2019 target multiples.

Based on where the stocks were trading relative to current prices, Baker downgraded JetBlue to neutral from overweight, but upgraded Alaska Air to neutral from underweight and United to overweight from neutral.

Oil up 9 sessions in a row, longest win streak for U.S. benchmark since 2010