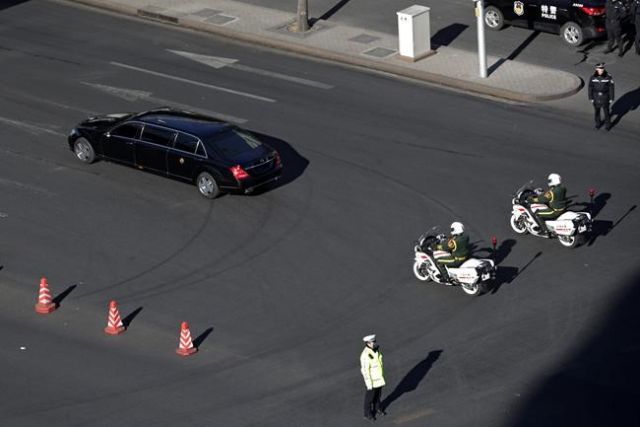 Kim’s trip, announced earlier by both sides, comes after U.S. and North Korean officials are thought to have met in Vietnam to discuss the site of a second summit.

Chinese foreign ministry spokesman Lu Kang gave no details about Kim’s schedule or China’s role as an intermediary between the U.S. and North Korea. But he said Beijing remains supportive of efforts to end tensions over U.S. demands for a halt to North Korea’s nuclear and missile programs.

“We always believe that, as key parties to the Korean Peninsula issue, it’s important for the two sides to maintain contact and we always support their dialogue to achieve positive outcomes,” Lu told reporters at a daily briefing.

He said further information about Kim’s activities, the outcome of his meetings and a possible visit by Chinese President Xi Jinping to North Korea would be “released in due course.”

A long motorcade thought to be carrying Kim, including motorcycle outriders reserved for state leaders, left a Beijing train station shortly after the arrival of an armoured train consisting of 20 to 25 cars — most of whose windows were blacked-out — along tracks lined by police and paramilitary troops.

Kim is expected to stay at the highly secure Diaoyutai State Guest House in the capital’s west, with meetings held at the Great Hall of the People, the hulking seat of the legislature that sits next to Tiananmen Square.

The trip marked a break with past practice in that it was announced in advance of Kim’s arrival, a possible sign of growing confidence on the part of North Korea and China, the North’s most important trading partner and a key buffer against pressure from Washington.

After years of cool relations following Kim’s assumption of power 2011, ties have improved remarkably over the past year as Xi seeks to maintain his influence in the region.

Kim’s trip comes as the U.S. and North Korea look to settle the North’s decades-long pursuit of a nuclear arsenal.

The U.S. and North Korea seemed close to war at points during 2017 as the North staged a series of increasingly powerful weapons tests that brought it closer to its nuclear goal of one day being able to target anywhere on the U.S. mainland.

Possibly fearing the economic effect of crushing outside sanctions imposed over his weapons tests, Kim abruptly turned to diplomacy with Seoul and Washington last year. He also visited China three times, notably without a reciprocal visit from Xi in a break with diplomatic convention.