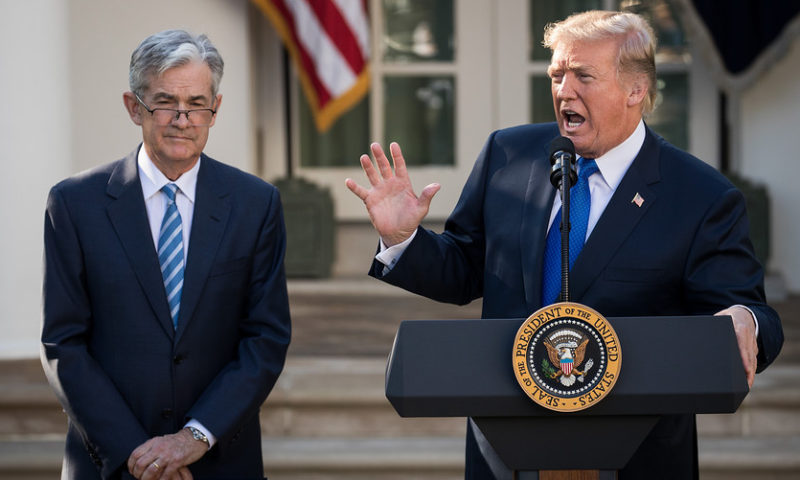 Once again, the market’s eye is on the Fed.

Friday’s near-750-point surge in the Dow DJIA, +0.42% looks set to be followed by a sideways day on Monday, overnight trading in U.S. futures markets suggested. But expect more volatility ahead, as investors continue to fret over the size and severity of the U.S. economic slowdown, and the Fed’s response to that.

That is today’s call of the day, from Vincent Chaigneau, the head of research at €455 billion Italian insurer Generali.

The bad news: The U.S. economy is set to “fall off its pedestal” in 2019, and the Fed will make two more rate increases before calling a halt by the summer, if not before. That will put an end to the greenback’s “impressive rally” and offer some relief to emerging markets.

But Chaigneau also calls attention to the U.S. interest-rate futures markets, which are already predicting there will be no Fed hikes at all in 2019, and even pricing in a cut by the end of the year. “So there is little room for a sustained Fed-inspired rally,” he observes.

Per Powell’s reassuring comments on Friday — that the central bank will “listen sensitively to the messages markets are sending” — Chaigneau thinks the Fed will be more “dependent on economic data and financial conditions” than it has been. “What is most needed now is better stability in the economic data, to erase the excess pessimism built in Q4.”

But Generali isn’t overly pessimistic and still reckons stocks are a good place for your money. The last quarter’s selloff was too severe, Chaigneau thinks, citing data from economic sentiment analysts Sentix that shows investors have become as pessimistic on the global economy as they were during the 2008 crisis — leading to “exaggerated” gloom.

His firm is putting cash to work in defensive sectors like utilities, telecoms and industrials, keeping a “neutral” stance on the U.S. and Europe, and going “overweight” on the U.K. (betting on a soft Brexit), Japan and Switzerland.

Investors in European stocks were cautious on Monday, despite gains in Asia overnight and hopes over renewed trade talks between Washington and Beijing.

Elsewhere, the U.K. government has returned from its Christmas break, with Parliament gearing up for a crucial Brexit vote.

Wall Street is keenly watching the U.S.-China trade dispute, with a fresh round of talks between the two nations scheduled for Monday and Tuesday in Beijing. There is evidence the dispute is causing pain on both sides, with Apple blaming its poor figures on weaker Chinese sales, but a broad manufacturing slowdown is also piling pressure on Chinese leaders, as the Wall Street Journal reported.