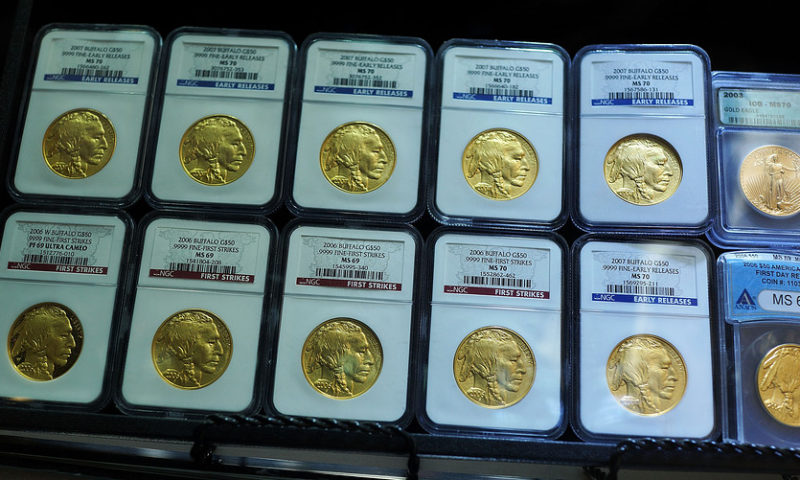 Dollar slips with ISM services survey down in December

Gold futures finished higher on Monday, staging a partial rebound from their worst single-session drop in two weeks, with prices getting a boost as downbeat U.S. ISM nonmanufacturing data helped pressure the dollar.

Some strategists maintain a bullish outlook for bullion and other precious metals on the back of expectations for continued volatility in global markets that have whipsawed so-called risk assets, highlighted by choppy trade in the Dow Jones Industrial Average DJIA, +0.42% and the S&P 500 index SPX, +0.70% in the past several months.

For gold, “the main trend remains bullish, even though the resistance of $1,300 still seems out of reach for now,” wrote Carlo Alberto De Casa, chief analyst, at brokerage ActivTrades, in a Monday research note.

On Friday, appetite for havens receded sharply after labor market data showed that the U.S. created a better-than-expected 312,000 new jobs in December to bring total employment gains in 2018 to a three-year high of 2.64 million. The unemployment rate ticked up to 3.9% as labor participation rose. Economists polled by MarketWatch had expected a gain of 182,000 nonfarm jobs.

Powell’s remarks suggested to some that the Fed may hike rates at a more measured pace, news that may provide long-term support for gold which tends to see weakened investment appetite when interest rates are competitively richer. Gold doesn’t offer a yield.

Softness in the U.S. dollar also offered a runway for gold to rise. A weaker dollar can make assets pegged to the currency more appealing to buyer using other monetary units. One measure of the buck, the ICE U.S. Dollar Index DXY, +0.28% was off 0.5% at 95.661 as gold futures settled.

Data Monday showed that activity at service-oriented U.S. firms grew in December at the slowest pace since midsummer. The nonmanufacturing index issued by the Institute for Supply Management fell to 57.6 last month from 60.7 in November.

The dollar also weakened as the British pound GBPUSD, -0.1643% strengthened against the greenback, ahead of a vote next week on U.K. Prime Minister Theresa May’s Brexit plan.

“For now, worries about tariffs, [U.S.-]China talks, Brexit, politics and [the U.S.] government shutdown are enough to add to gold,” said George Gero, managing director at RBC Wealth Management, in a daily note.