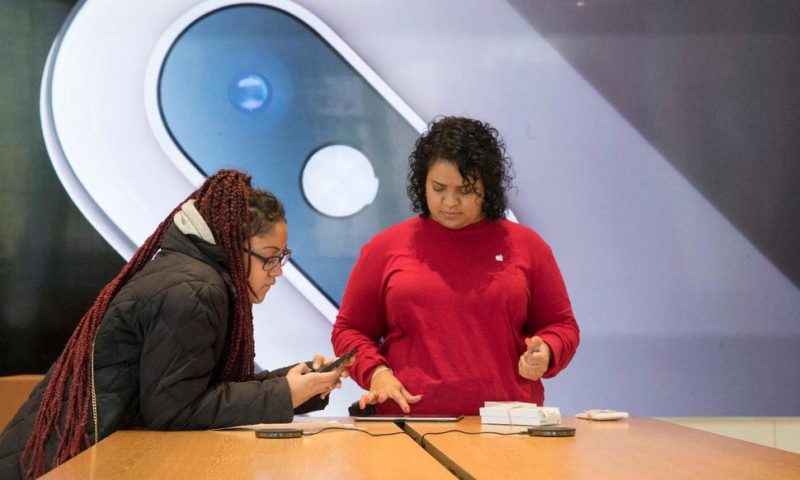 Behind Apple’s news of weak iPhone sales lies a sobering truth: The tech industry has hit Peak Smartphone, a tipping point when everyone who can already afford one owns one and no breakthroughs are compelling them to upgrade as frequently as they once did.

NEW YORK — Behind Apple’s disconcerting news of weak iPhone sales lies a more sobering truth: The tech industry has hit Peak Smartphone, a tipping point when everyone who can afford one already owns one and no breakthroughs are compelling them to upgrade as frequently as they once did.

Some manufacturers have boosted prices to keep up profit. But Apple’s shortfall highlights the limits of that strategy. The company said demand for iPhones is waning and revenue for the last quarter of 2018 will fall well below projections, a decrease traced mainly to China.

Apple’s shares dropped 10 percent Thursday on the news — its worst loss since 2013. The company shed $74.6 billion in market value, amid a broader sell-off among technology companies , which suffered their worst loss in seven years.

And it’s not just Apple. Demand has been lackluster across the board, Ives said. Samsung, long the leading seller of smartphones, has been hit even harder, as its phone shipments dropped 8 percent during the 12 months ending in September.

“The smartphone industry is going through significant headwinds, “Ives said. “Smartphone makers used to be like teenagers, and the industry was on fire. Now it feels like they’re more like senior citizens in terms of maturity.”

Tech innovations in phones grew in leaps and bounds earlier in the 2010s, with dramatic improvements in screen size, screen resolution, battery life, cameras and processor speed every year.

But the industry is a victim of its own success. Innovation began to slow down around 2014, once Apple boosted the screen size with the iPhone 6 and 6 Plus models. While phones kept improving, new features tended to be incremental, such as a new flash technique to already excellent phone cameras. It’s the stuff consumers won’t typically notice — or want to shell out for.

“Since the iPhone 6 you’ve seen it has been tough to innovate to continue to raise the bar,” Ives said.

Apple customers now upgrade every 33 months on average, longer than the 24 or 25 months three years ago, he said.

Apple’s diminished growth projections, fueled by plummeting sales in China, have reinforced fears the world’s second-largest economy is losing steam. Its $1,000 iPhone is a tough sell to Chinese consumers unnerved by an economic slump and the trade war with the U.S. They also have a slew of cheaper smartphones from homegrown competitors such as Huawei, Xiaomi and Oppo to choose from.

The fact that even Apple’s iPhone juggernaut is suffering cements a larger trend for all major smartphone makers. After a steady rise for a decade, worldwide smartphone shipments fell 3 percent to 1.42 billion in 2018, the first annual drop, according to International Data Corp., which tracks such movements. IDC estimates that shipments will rebound 3 percent in 2019 to 1.46 billion, but that still falls short of 2017 levels.

Vivian Yang, a manager at a Beijing technology company, also balked at the price. “Nobody needs such a phone,” she said.

IDC analyst Ramon Llamas said the cycle might bottom out and start growing again in 2021 or 2022, when people’s current phones start reaching the end of their useful life. “People will still replace their phones. It’s going to happen eventually,” he said.

But there’s no “silver bullet” that will spur growth to levels seen in the past when the industry was less mature.

Foldable smartphones , with screens that unfold like a wallet to increase display size, are one thing that could spur excitement, but they’re expensive and not due out until at least the end of the year.

Another thing that might spur growth: 5G, the next-generation that telecom companies are currently in the process of building, expected to be faster and more reliable than the current 4G network. The first 5G compatible phones are due out this year.

“There’s more pressure on 5G as the next-wave smartphone,” since sales are so lackluster, said Ives. “There will be a battle royale for 5G phones.”

But 5G will take years for broad, nationwide deployment, so the new 5G smartphones coming out this year are not likely to make much of a splash immediately either.

Analysts say smartphone makers need to push into under-saturated areas like Africa and elsewhere, and also sell more services like cloud storage, streaming music and phone software. But the glory days of untrammeled growth appear to be over.