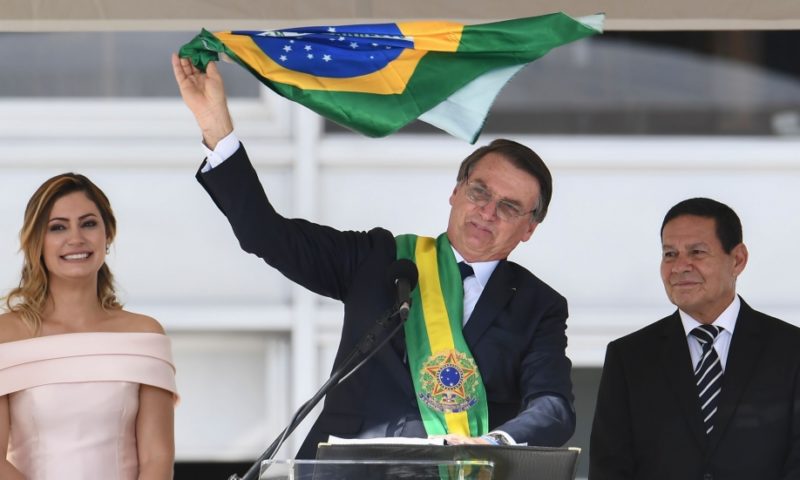 Hours after taking office, Brazil’s new president, Jair Bolsonaro, has launched an assault on environmental and Amazon protections with an executive order transferring the regulation and creation of new indigenous reserves to the agriculture ministry – which is controlled by the powerful agribusiness lobby.

The move sparked outcry from indigenous leaders, who said it threatened their reserves, which make up about 13% of Brazilian territory, and marked a symbolic concession to farming interests at a time when deforestation is rising again.

“There will be an increase in deforestation and violence against indigenous people,” said Dinaman Tuxá, the executive coordinator of the Articulation of Indigenous People of Brazil (Apib). “Indigenous people are defenders and protectors of the environment.”

Sonia Guajajara, an indigenous leader who stood as vice-presidential candidate for the Socialism and Freedom party (PSOL) tweeted her opposition. “The dismantling has already begun,” she posted on Tuesday.

Previously, demarcation of indigenous reserves was controlled by the indigenous agency Funai, which has been moved from the justice ministry to a new ministry of women, family and human rights controlled by an evangelical pastor.

The decision was included in an executive order which also gave Bolsonaro’s government secretary potentially far-reaching powers over non-governmental organizations working in Brazil.

The temporary decree, which expires unless it is ratified by congress within 120 days, mandates that the office of the government secretary, Carlos Alberto Dos Santos Cruz, “supervise, coordinate, monitor and accompany the activities and actions of international organizations and non-governmental organizations in the national territory”.

Bolsonaro, who has often criticised Brazilian and international NGOs who he accuses of “sticking their noses into Brazil”, defended the measure in a tweeton Wednesday. “More than 15% of national territory is demarcated as indigenous land and quilombos. Less than a million people live in these places, isolated from true Brazil, exploited and manipulated by NGOs. Together we will integrate these citizens,” he posted.

Separately, the incoming health minister, Luiz Henrique Mandetta, suggested on Wednesday that there would be spending cuts on healthcare for indigenous people. “We have figures for the general public that are much below what is spent on healthcare for the indigenous,” he said, without providing details.

After she was sworn in on Wednesday, the new agriculture minister, Tereza Cristina Dias, defended the farm sector from accusations it has grown at the expense of the environment, adding that the strength of Brazil’s farmers had generated “unfounded accusations” from unnamed international groups.

Silas Malafia, an influential televangelist and close friend of Bolsonaro, said developed countries who centuries ago cut down their own forests should pay if they wanted Brazil to preserve the Amazon.

“We’re going to preserve everything because the gringos destroyed what they had?” he said.

Tuxá, the indigenous leader, said: “We will go through another colonisation process, this is what they want.”

Trudeau’s environmental record on the line in Canada election year