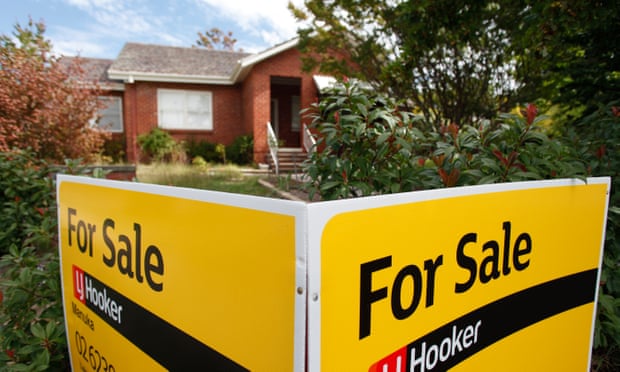 Sydney and Melbourne properties have now dropped 11.1% and 7.2% respectively compared with 2017 peak

House prices have fallen the most in a single quarter since 2008, according to new data for December.

Compared with their 2017 peak, Sydney and Melbourne’s house prices have now dropped 11.1% and 7.2% respectively, and a sharp fall in the December quarter hints that the decline is picking up pace, according to data researcher CoreLogic.

Prices dropped 4.8% in 2018 nationwide, prompting Deutsche Bank to identify a potential Australian housing crash as one of the top 30 risks to the global economy.

But 2018 brought a long slide, with Sydney prices falling 8.9% across the year, and Melbourne falling 7%.

And the pace picked up towards the end of the year. In the three months to December, Sydney prices dropped 3.9% – with 1.8% in just one month – and Melbourne fell 3.2%.

Sydney prices are now back to the level of August 2016, and Melbourne is back to the prices of February 2017. Perth has not seen houses this cheap since 2009, and Darwin since 2007.

According to CoreLogic’s head of research Tim Lawless, financial regulator Apra’s tightening of lending criteria was the biggest reason for the drop.

“Most regions around the country have reacted to tighter credit conditions by recording weaker housing market results,” he said in the report. “Buyers will be in the driver’s seat when it comes to choosing a property and negotiating on price.”

Lawless added that prices could fall even further in February, depending on how many houses come on to the market.

“Typically at this time we see the number of advertised listings ramp up following the Christmas and New Year slowdown. If listing levels return to or exceed levels from late 2018 it could lead to even weaker housing conditions as buyers are spoilt for choice.”

The downturn has prompted Torsten Slok, Deutsche Bank’s chief international economist, to list the Australian housing market as one of the top 30 economic risks to look out for in 2019.

A “house price crash in Australia and Canada” ranks alongside a no-deal Brexit, the US government shutdown and the escalation of the US-China trade war in the bank’s list of potential financial danger moments.