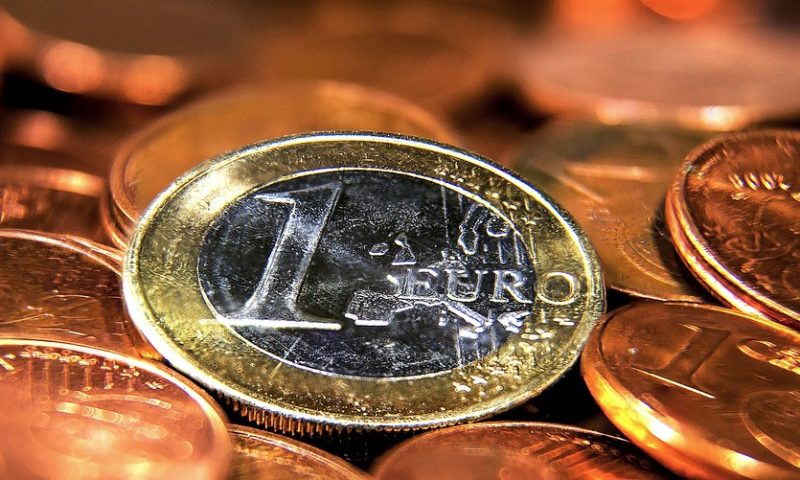 From a noble idea to ‘whatever it takes’

The euro will celebrate its 20th anniversary on New Year’s Day, marking the end of a second decade that saw the shared currency survive a devastating sovereign-debt crisis and European political turmoil.

Here is a look at its history and what the future could hold.

Economic and monetary union was an idea that was seriously discussed beginning in the 1960s, but global political and economic turmoil stood in the way. Nevertheless, in the 1970s, member states of what would become the European Union agreed to narrow currency fluctuations between each other’s monetary units, and in 1979, the European Monetary System was established, linking currencies together in an effort to limit fluctuations.

Those efforts were heightened and refined over the years, at times creating turmoil, such as the British pound’s “Black Wednesday ejection from what was then known as the European exchange rate mechanism in 1992.

After years and months of wrangling and negotiation, the euro itself was launched on Jan. 1, 1999, in a process created by the Maastricht Treaty in 1991. No euro notes or coins were yet in circulation, but exchange rates of the participating countries were locked against each other. The European Central Bank, which sets monetary policy for the eurozone, came into existence only six month earlier, in the summer of 1998.

Cyprus, Estonia, Latvia, Lithuania, Malta, Slovakia and Slovenia joined later, but technically all 27 European Union members states are legally committed to joining the eurozone at some point down the line. This only excludes Denmark and the United Kingdom. The Danish krone USDDKK, +0.0169% is instead pegged to the eurozone currency, while the U.K. secured an opt-out from the EU. On top of that, the U.K. of course voted to leave the EU. Brexit is set to come into effect at the end of March 2019.

Since its inception, the shared currency has become one of the world’s most used payment and reserve units after the U.S. dollar.

In the aftermath of the global financial crisis of 2008 and 2009, Europe faced a sovereign debt crisis. The woes began in Greece, which in 2010 revealed an unexpectedly large debt pile.

Eurozone bond yields soared, with weaker eurozone members’ government debt selling off in favor of safer bets like German bunds. Greece was forced to rely on a series of bailouts from Brussels and the IMF, while market participants considered what would happen if Athens would crash out of the currency union and return to the drachma, revaluing its debt. Moreover, fears of contagion to other eurozone countries also spread.

A collapsed housing bubble soon cratered Ireland’s banking system, leaving Dublin to also seek a bailout, as did Portugal. Fears over debt-strapped Spain and Italy also mounted, amid worries that both economies would be too big to bail out. Soaring Italian bond yields in 2011 and 2012 heightened worries over the sustainability of the government’s debt load, underlining a “doom loop” between sovereign debt and the banking system, which held large amounts of government paper.

The eurozone crisis led to the establishment of the European Stability Mechanism — a €500 billion bailout fund — as well as emergency loans from the ECB to recapitalize European banks, and harsh and controversial austerity measures across the currency bloc. The economic consequences were devastating, sending unemployment soaring in the hardest hit countries and throttling growth across the region.

Amid persistent turmoil in eurozone debt markets, particularly for Spain and Italy, ECB President Mario Draghi in July 2012 famously pledged the central bank would do “whatever it takes” to preserve the euro. The pledge, along with the creation of an emergency bond-buying plan that was never tapped, was credited with helping to calm bond-market turmoil and quell the crisis.

Much later, in March 2015, the central bank began its own quantitative easing program, buying billions of government and corporate bonds each month. The asset buying initiative will come to an end this months, three years and nine months later. The ECB also dropped interest rates to all-time lows, with its main lending rate at 0% and the deposit rate it pays on money parked overnight pushed into negative territory at minus 0.4%, where both remain.

With the QE cat back in the bag, investors are now waiting for the ECB to raise interest rates. This should give the euro a nice little tailwind, analysts say, just like the Federal Reserve’s monetary tightening boosted the greenback in 2018.

But Draghi has been careful not to overpromise amid slowing eurozone growth. The ECB has pledged to leave rates at present levels at least through the summer of next year.

Since Draghi’s “whatever it takes” moment, worries about the feasibility of the eurozone have also come up again. In 2018, a pair of euroskeptic parties formed a governing, and Rome’s budget proposal for 2019 that included a rising budget deficit, which immediately rubbed Brussels the wrong way and raised fears of a showdown capable of raising renewed questions about Italy’s membership in the shared currency.

That said, tensions appeared to ease before year-end, with Italy planning on a less egregious deficit increase. Still, market participants worry about potential market turmoil as the ECB ends its bond-buying program.

On the whole, the eurozone economy isn’t doing too hot going into the New Year, but some market participants believe that euro assets look cheap and that a slowing of the U.S. expansion could make investors look favorably on the old world in the second half of 2019.

The euro never fell as low again, not even in the years following the financial crisis. In the postcrisis world, i.e. after 2008, its low point was near-parity at $1.0378 in December 2016.

U.S. stock futures buoyed by trade-deal hopes ahead of last session for dismal 2018