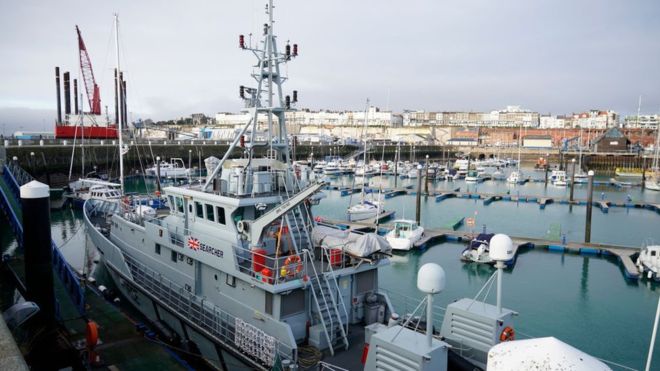 Concerns have been raised over the readiness of a British firm contracted by the government to run extra ferries in the event of a no-deal Brexit.

Seaborne Freight was awarded a £13.8m contract this week to run a freight service between Ramsgate and Ostend.

The firm has never run a ferry service and a local councillor said it would be impossible to launch before Brexit.

The government said it had awarded the contract in “the full knowledge that Seaborne is a new shipping provider”.

The Department for Transport said that “the extra capacity and vessels would be provided as part of its first services”.

“As with all contracts, we carefully vetted the company’s commercial, technical and financial position in detail before making the award,” it added.

Conservative Kent county councillor Paul Messenger said it was impossible for the government to have carried out sufficient checks on the firm.

“It has no ships and no trading history so how can due diligence be done?” he asked.

Mr Messenger said he didn’t believe that it was possible to set up a new ferry service between Ramsgate and Ostend by 29 March – the date when the UK is due to leave the European Union.

The narrow berths for ships at the Port of Ramsgate mean there are only a few suitable commercial vessels, most of which are currently already in service, he said.

Ferry services have not operated from Ramsgate Port since 2013 after cross-channel operator TransEuropa collapsed, owing around £3.3m to Thanet District Council.

Mr Messenger said he was “perplexed” at the choice of Seaborne Freight to run the service.

“Why choose a company that never moved a single truck in their entire history and give them £14m? I don’t understand the logic of that,” he said.

But Seaborne Freight, which was formed less than two years ago to revive the Ramsgate-Ostend line, insisted it will launch its freight service between Ramsgate and Ostend before 29 March.

He declined to give details on which ships it planned to use for the service, saying the information was commercially sensitive, but said they planned to start operations with two ships before “very quickly” increasing to four by late summer.

He said dredging in Ramsgate Port would start on 4 January in preparation for the freight service.

The firm said it had originally intended to start the service in mid-February but this had now been delayed until late March for operational reasons.

It said directors and shareholders had been working during the past two years to restart the service.

“This phase has included locating suitable vessels, making arrangements with the ports of Ostend and Ramsgate, building the infrastructure, as well as crewing the ferries once they start operating,” the firm’s statement added.

The new contracts are part of the government’s contingency planning, which aims to ease the potential for severe congestion at main port Dover if the UK leaves the European Union without a deal.

The department has warned that increased border checks by EU countries in the case of a no-deal Brexit could “cause delivery of critical goods to be delayed”, and “significant wider disruption to the UK economy and to the road network in Kent”.

The government has for some time now acknowledged that in the event of a no-deal Brexit, contingency plans at ports other than Dover would need to be in place.

But it appears that Transport Secretary Chris Grayling’s department only started awarding contracts to shipping firms a few weeks ago, with no time left, it says, for a full public tender process.

And while the two large international firms enlisted to provide extra capacity have existing fleets and large operations, Seaborne does not, and has given few details on how it will get a service up and running in a matter of months.

The Department for Transport also wasn’t too keen on making much noise about these plans – it quietly posted notices of the awards on an EU portal on Christmas Eve, and the BBC was only alerted to them by a data firm, Tussell.

And it’s worth noting that without the award to Seaborne, the government would be in a position where the two beneficiaries of a no-deal Brexit were a Danish and a French firm – based, of course, in the EU.

The Department for Transport says the new contracts will provide “significant extra capacity” to UK ports in the event of a no-deal Brexit,

The BBC understands that the three firms chosen are likely to retain a portion of their award even if their services are no longer needed, due to a deal being reached with Brussels.

However, in that event, the government would then seek to sell the extra capacity back to the market.

Labour MP Tonia Antoniazzi, a supporter of the Best for Britain campaign for a second referendum, said: “Never has it been clearer that our government is selling us down the river over Brexit.

“A firm that has never run a ferry service before has been awarded a multi-million pound contract and they don’t even have any ships. This idea should have been sunk before it saw the light of day.”

Ed Davey, home affairs spokesperson for the Liberal Democrats, said reports that the government had signed a contract with “a ferry company with no ferries” summed up the government’s “farcical” approach to Brexit.

The UK is due to leave the EU on 29 March – following the result of the 2016 referendum.

It and the EU have agreed a withdrawal agreement – or “divorce deal” – and a political declaration outlining ambition for future talks – but it needs to be agreed by Parliament for it to come into force.

A vote by MPs on the deal had been scheduled for 11 December, but Prime Minister Theresa May postponed it until January when it became clear her deal would be rejected, leading to widespread anger in the Commons.