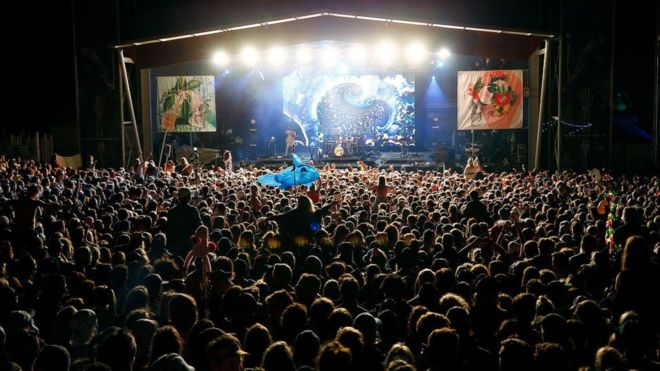 Music festival-goers across Australia have been warned about a “dangerous orange pill”, after a young man died of a suspected drug overdose.

Joshua Tam, 22, became ill at the Lost Paradise festival in New South Wales (NSW) on Saturday. He died in hospital.

Police said attendees had made “sophisticated” attempts to carry drugs, such as stuffing them inside a barbecued chicken and jars of Vegemite.

Four people have died at music festivals in NSW since September.

In October, the state introduced laws that will jail people for up to 25 years if they supply a drug that kills someone.

The exact cause of Mr Tam’s death is not yet known. He and two people who fell ill but survived had taken an “unknown substance”, police said.

Following the incident, organisers of Falls Festival – a major event taking place in four states – issued a warning about a “dangerous orange pill that is currently in circulation across Australia”.

Three people were charged with supplying drugs at Lost Paradise, including two men who allegedly had at least 80 MDMA pills each.

“On one instance, certainly someone was quite determined… [they] inserted drugs into the stuffing of a barbecue chicken,” said Supt Rod Peet from NSW Police.

State Premier Gladys Berejiklian has vowed to shut down another festival, Defqon.1, following the deaths of two people in September.

She has resisted calls to allow pill testing, arguing it would effectively encourage people to experiment with dangerous substances.

Advocates for such a move have pointed to examples in countries where drug testing is common, saying it makes people safer.

MDMA forms the base for ecstasy, before it is mixed with other chemicals to form a tablet. It is distinct from MDMA powder, which is swallowed or snorted.

Russia detains American in Moscow on suspicion of spying