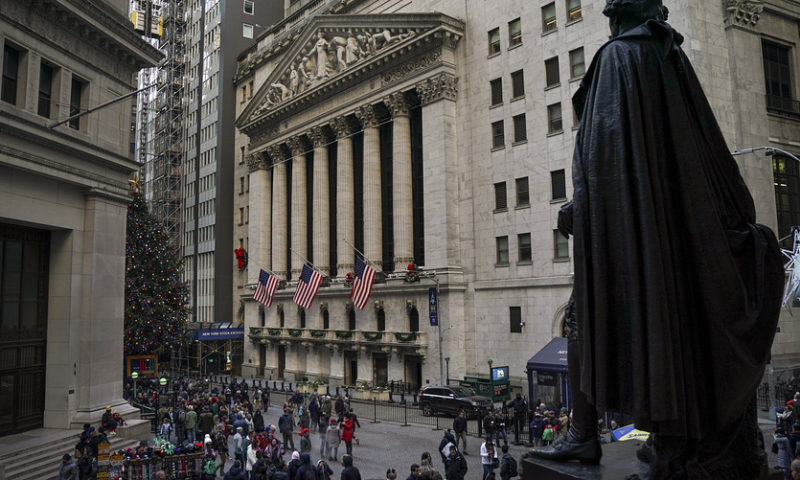 Stocks ended mostly lower in a choppy Friday session but held on to their first weekly gains of the month in a turbulent holiday environment marked by wild swings between gains and losses.

All three indexes are still nursing sharp month-to-date losses, however, with the S&P down 9.9%, the Dow off 9.7% and the Nasdaq down 10.2%. The Nasdaq entered a bear market this month, defined as a 20% pullback from a recent peak, while the S&P 500 and Dow remain solidly in correction territory with declines of more than 10% from their late September and early October highs, respectively.

Markets have been batted around this week as a result of light holiday volume and computer-driven trading. Those factors have triggered several sharp daily moves and a rise in volatility, which has taken investors by surprise in what can be a quiet period of trading at the end of the year, analysts said.

A still-unresolved government shutdown remains as an overhang for stocks, as do concerns about the economy and the next round of company earnings. Analysts caution that volatile conditions for trading could extend well into the new year.

It’s no surprise to see some “selling fatigue” after several sessions of virtually “indiscriminate selling” contributed to the stock market’s steep December losses, said Eric Wiegand, senior portfolio manager at U.S. Bank Wealth Management, in a phone interview. That said, it takes time for markets to establish a bottom, a process that usually entails retests of the lows and sideways movement before a sustainable move higher, he said.

Investors should see some clarity in the new year, either positive or negative, as the fourth-quarter earnings season gets under way in mid-January and market participants look ahead to a late-January Federal Reserve meeting that should offer further clarity on the central bank’s policy intentions, he said.

“Although U.S. stock markets bounced back to life yesterday to end positive and Asian shares traded mostly higher this morning, it is certainly too early for any celebrations,” said Lukman Otunuga, research analyst at FXTM, in a note. “With investor appetite for riskier assets seen diminishing amid the unfavorable market conditions, global equity markets remain vulnerable to downside shocks.”

What’s on the economic calendar

The partial government shutdown means the release of November data on advance trade in goods that had been scheduled for Friday morning was postponed.

Meanwhile, the MNI Chicago business barometer, a survey-based gauge that’s often a signpost for the broader U.S. economy, slipped to a still robust 65.4 pointsin December from an 11-month-high reading of 66.4 a month ago.

The National Association of Realtors said pending home sales fell 0.7% in November to a reading of 101.4, a four-year low and another sign of widespread weakness in the real-estate market.

Oil prices rallied Friday, with the U.S. benchmark CLG9, +1.14% finishing with a gain of 1.6%, as the commodity rebounded from a sharp selloff Thursday. Oil was positive after data from the Energy Information Administration showed U.S. crude supplies fell by 46,000 barrels in the week ended Dec. 21.

The ICE Dollar Index DXY, -0.19% was off 0.1%, led by a fall in the dollar against the Japanese yen USDJPY, -0.64% , which is viewed as a haven asset in times of economic and financial-market uncertainty.